Based on Georgian Handwritings Three Types of Font will be Created 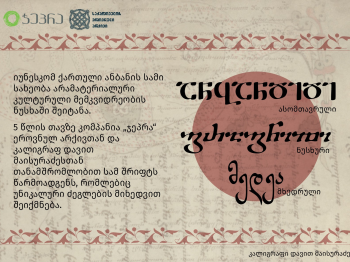 Three types of alphabet fonts - "Anbandidi", "Gragnili" and "Medea" - will be created based on Georgian manuscripts. In cooperation with the National Archives of the Ministry of Justice of Georgia, the company "Gepra" and calligrapher Davit Maisuradze, the monuments preserved in the National Archives were selected for the production of fonts.

Asomtavruli will be based on the 9th century manuscript "Anbandidi Gospel", Nuskhuri – on the 15th century Kontakion "Liturgy of John Chrysostom", and the Mkhedruli font – based on the 17th century monument "The Story of Jason and Medea". The fonts will be available for free to any interested person.

"We are pleased to add three distinctive fonts to the handwritten font gallery -"Gepra"-s special project, which was founded in 2019, and thus further contribute to the development of the Georgian writing system and the popularization of Georgian culture. UNESCO delegation was fascinated by the fact that all three types of Georgian script are still alive today, are still used in theological schools and worship services, and all three are taught from school”, said Rusudan Ustiashvili, Gepra Special Projects Manager.

"These fonts -" Anbandidi "," Gragnili "and" Medea "- are based on ancient handwritings made with beautiful calligraphy. The Asomtavruli font of the Anbandidi Gospel reflects the controversy of the 9th century. The decoration of medieval art developed in Nuskhuri font ("Gragnili") can be seen. The Mkhedruli font ("Medea") is associated with the enlightenment for me. All three are easy to read and refined, so I'm sure we will see samples made with these fonts in many places in the near future, "said calligrapher Davit Maisuradze.

"Living Culture of All Three Types of the Georgian Alphabet" was included in the list of intangible cultural heritage on November 30, 2016 by UNESCO. On the occasion of the 5th anniversary of this fact, the society will get acquainted with the new fonts - "Anbandidi", "Gragnili" and "Medea". The presentation of the three types of alphabet fonts will take place on November 30 at the National Archives Exhibition Pavilion.