19th Century Georgian Chronicle "," The First Swallow "and" Sherekilebi "- Restored Films in the Cinema Hall of the National Archives 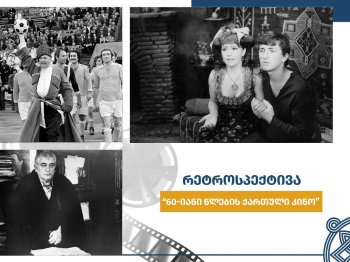 The Cinema of the National Archive of the Ministry of Justice of Georgia is hosting screenings of restored Georgian feature films. Alexander Rekhviashvili's "Chronicle of the 19th Century" (1978), Nana Mchedlidze's "The First Swallow" (1975) and Eldar Shengelaia's "Sherekilebi" will be shown on June 10, 11 and 12 at 19:00 as part of the retrospective of Georgian cinema of the 60s. (1974).

Distinctive works of digitally restored Georgian cinema classics are presented at the screenings organized by the Georgian National Film Center and the National Archives of Georgia. At the following screenings, viewers will see feature films: Merab Kokochashvili's "Big, Green Valley" and Rezo Esadze's "Falling in Love". The retrospective will close on June 19 with Tengiz Abuladze's "Repentance".