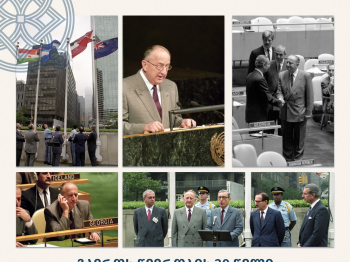 The National Archive of the Ministry of Justice of Georgia has published photo and video documents depicting this day on the 30th anniversary of Georgia's accession to the United Nations.

The National Archives received archival material from the United Nations Audio-Visual Library and the photo archive of the same organization. Along with these documents, the response of the Georgian press to the anniversary is published on a special page.

On July 31, 1992, at the 46th meeting of the 88th plenary session of the UN General Assembly, Georgia became the 179th member of the organization. First Deputy Prime Minister of Georgia, Minister of Foreign Affairs Aleksandre Chikvaidze gave a speech at this session of special importance for the history of Georgia. On the same day, a ceremony of raising the Georgian flag was held in front of the UN office in New York.

The page dedicated to joining the United Nations is available at the link: https://archive.gov.ge/ge/sakartvelos-gatsevrianeba-gaeroshi-1.