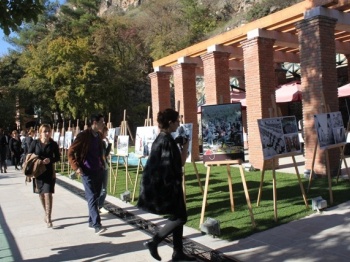 By the information of Ms. Teona Iashvili, general director of the National Archives, “photo materials depicting the history of viticulture and wine-making in Georgia. Among them are: photo documents taken by Dimitri Ermakov and Konstantin Zanis in the 19th-20th centuries, as well as the materials from the collection of “Saqinformi”, preserved at the National Archives of Georgia, photos of the exhibits from the National Museum of Georgia, modern photos taken in “Winery Khareba”.

According to Irina Machurishvili, PR manager of the “Winery Khareba”, the interested persons will have opportunity to see the development of viticulture and wine-making in Georgia and compare it with the modern processes.

In the frames of the exhibition the photo album, containing all the photo materials from the exhibition, was presented. Visitors could also see the fragments from the documentaries about the wine-making that were shot in different regions of Georgia in the 30-80s of the last century and are preserved at the National Archives of Georgia.

Before the opening ceremony the guest s acquainted with the touring complex “Wine Tunnel”, participated in wine press out and making of Churchkhelas.

Exhibition “Ghvinobistve” will be continued at the exhibition hall of the National Archives of Georgia from today and last till October 31. Exposition is free to be attended.