The National Archival Fonds were enriched with Important Materials in 2015 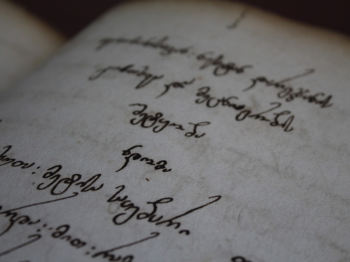 Among them are: the manuscript of “The Knight in the Panther’s Skin”, rewritten in the 19th century, unstudied till now; the fragment of the unknown manuscript of the 17th-18th centuries; the fragments of the 15th-16th centuries two manuscripts, that were found in the cover of the old printed book; the old printed gospel, written in mkhedruli; “The Knight in the Panther’s Skin”, edited in 1888.

It’s noteworthy that due to the great effort of Minister of Justice, Thea Tsulukiani the digital copy of the private archive of Khariton Shavishvili, the representative of the First Republic of Georgia to the League of Nations, was transferred to the National Archives of Georgia from the Library of the United Nations Office at Geneva; also the State Historical Archive of Ukraine transferred the digital copies of the two historical maps to the National Archives.