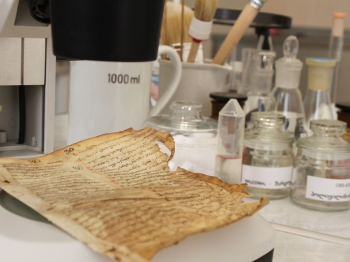 23 807 papers, 437 photos, 14 books, 126 newspapers, 85 technical drafts and 20 maps were held conservation and restoration treatment in 2015 at the Laboratory of Restoration that was modernly equipped with the support of the Ministry of Justice.

Among the restored documents are: 871 papers and 150 parchments, preserved at the Division of the Old Documents of the Central Historical Archive.

Besides, the documents of fonds of The First Democratic Republic of Georgia; materials preserved at fonds of Opera and Ballet Theatre and Akaki Shanidze were also restored.

Among the restored photos are the album of Caucasus views and the damage of Trans Caucasus railway during the inundation.

The Laboratory of restoration is involved in the digitalization project. In its frame during the year 125 items were prepared for the scan and sat in a new cover.