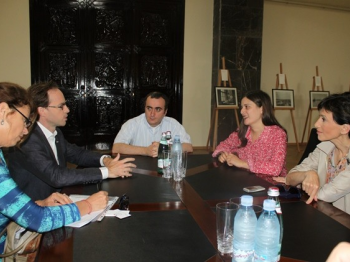 Director of the National Center of Cinematography of France, Eric Garandeau and the Regional Attache of the Consulate of France in Turkey in audio-visual affairs, Fany Ober Mallor, with the invitation of the Georgian National film center, visited the National Archives of the Ministry of Justice of Georgia today.

The guests were accompanied by the head of the Georgian National Film Center, Nana Janelidze and the other employees of the center.

The sides agreed to deepen the future cooperation that considers sharing the experience and implementing of the joint projects.