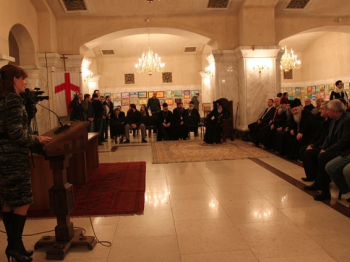 Conference about the approval of Autocephaly and Orthodox festival was held at Holy Trinity Cathedral Youth Center. Catholicos-Patriarch of All Georgia Ilia II, other clerics, Minister of Culture Guram Odisharia, General Director of the National Archives of Georgia Teona Iashvili and others participated in the arrangement.

Director of the Central Historical Archive Anton Vacharadze focused on one document connected with the struggle for the autocephaly of Georgian Church. The representative of the Central Archive of the Contemporary History Natia Mirianashvili made report “The question of the autocephaly of Georgia in the first half of the 20th century”.
The conference was closed with the speech of the Catholicos-Patriarch of All Georgia Ilia II about the century-old history of the Orthodox Church of Georgia.

The arrangement was held yesterday at the same time with the exposition dedicated to the Orthodox festival and the day of the approval of the Autocephaly of Georgia. The Gospel, called “Anbandidi” (9th century); hymns with old musical note signs (9th – 10th centuries); Ancha Gospel (12th century); Davitni (12th century); will of David Aghmashenebeli issued to Shio mGhvime monastery (1123), etc. are presented at the exhibition, as well as the photos of illuminated ecclesiastical manuscripts and the approval of the autocephaly of the Georgian Orthodox Church.