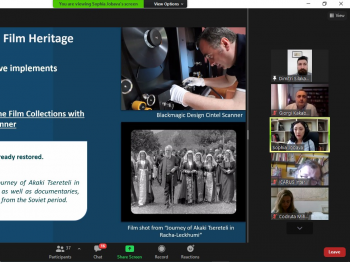 The National Archives of the Ministry of Justice of Georgia participated in the 26th Congress of the International Center for Archival Research (ICARUS). At the meeting held on the Zoom platform, the representatives of the Georgian National Archives introduced the participants to two ongoing projects: "World War II in the Georgian Archives" And "Preservation of Georgian Film Heritage", which envisages digitization and digital restoration of Georgian film collections, creation of an online film catalog and construction of a new building for the Central Archive of Film and Photo Documents.

From the Georgian side, the meeting was attended by: Sophio Jobava, Head of the Public Relations and International Organizations Department of the National Archives of Georgia, Giorgi Kakabadze, Director of the Central Archive of Film and Photo Documents, and Dimitri Silakadze, Employee of the Scientific Department.

Georgian participants invited foreign colleagues to the 6th International Online Conference of the National Archives of Georgia, which will be held on September 23-24, 2021.