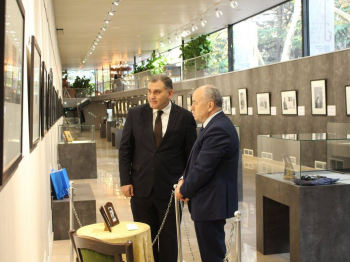 Today an Ambassador of Poland to Georgia Mariusz Maszkiewicz visited the exhibition pavilion of the National Archives of Georgia and get acquainted with the current exhibition "Repressions in Georgia". Deputy Minister of Justice Mikheil Sarjveladze personally hosted the ambassador.

80 years have passed since 1937 repressions. Photographs, written documents and memorial items on the exposition are presented to the viewers for the scale and content of repressions carried out in Georgia in the 1920s and 1930s.

Mariusz Maszkiewicz also got acquainted with the documents, preserved in the National Archives of Georgia, reflecting the relations between Poland and Georgia.

During the visit in the Exhibition Pavilion, the Ambassador spoke about the events planned for the year of Polish cultural heritage in Georgia in 2018.

The visit of the Ambassador of Poland to the exhibition Pavilion of the National Archives was planned after the Minister of Justice held a summary presentation of the reforms implemented in 2013-2017 at Kvareli branch of Justice Training Center for the heads of diplomatic missions accredited in Georgia and international organizations. At the meeting, the Minister briefly reviewed the activities and reforms implemented by the Ministry of Justice, as well as the largest projects implemented by eleven Legal Entities of Public Law, under its jurisdiction. Among them was the construction of the Exhibition Pavilion of the National Archives, which was opened in July 2016 and has hosted more than 15 exhibitions.

The exhibition "Repressions in Georgia" was opened on October 24 and will last till November 30.