Minister of Justice opened the Exhibition &quot;First Democratic Republic of Georgia&quot; in Kutaisi 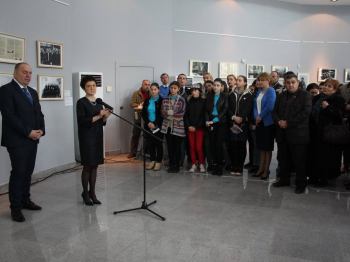 Minister of Justice, Thea Tsulukiani opened the exhibition "The First Democratic Republic of Georgia" on 25 November in Kutaisi TBC Gallery. The event that was organized by the National Archives of the Ministry of Justice of Georgia with the support of TBC Bank was attended by the representatives of the local self-governance organs and cultural-educational institutions.

Diverse and large-scale exhibition about the First Republic of Georgia was prepared on the initiative of the Minister of Justice. The large part of the archival materials, depicting the history of 1918-1921 is presented for the society for the first time. Among them is the private archive of the first representative of the League of Nations Khariton Shavishvili. The digital copy of the archive was brought from the Library of the United Nations Office at Geneva to Georgia with the effort of the Minister of Justice.

The exposition includes the written and photo materials, preserved at the National Archives of Georgia, depicting the three years period of independence (1918-1921) of the First Republic and it is divided into the following subjects: the act of independence of Georgia and national attributes; first elections, founding session of the constituent assembly and legislative work; the state and the church; foreign relations; armed forces; public life; loss of independence; Khariton Shavishvili.

63 photos and the photo reproductions of the written documents will be exhibited.

A special catalogue was created for the exhibition.

The exhibition was presented at Dimitri Shevardnadze Georgian National Gallery from 12 till 31 October; on 6-20 November the exposition was hosted by Kakheti Regional Archive in Telavi; on 25 November-13 December it will be exhibited in Kutaisi.

From 14 December the exposition will be moved to Batumi TBC Gallery.

“The First Republic of Georgia” was dedicated to the 95th anniversary of the National Archives.