Minister of Justice opened the Exhibition &quot;First Democratic Republic of Georgia&quot; in Zugdidi 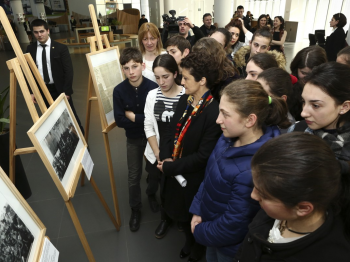 Diverse and large-scale exhibition about the First Republic of Georgia was prepared on the initiative of the Minister of Justice. The large part of the archival materials, depicting the history of 1918-1921 is presented for the society for the first time. Among them is the private archive of the first representative of the League of Nations Khariton Shavishvili. The digital copy of the archive was brought from the Library of the United Nations Office at Geneva to Georgia with the effort of the Minister of Justice.

The exposition includes the written and photo materials, preserved at the National Archives of Georgia, depicting the three years period of independence (1918-1921) of the First Republic and it is divided into the following subjects: the act of independence of Georgia and national attributes; first elections, founding session of the constituent assembly and legislative work; the state and the church; foreign relations; armed forces; public life; loss of independence; Khariton Shavishvili.

The exposition at Zugdidi Public Service Hall will last till 25 March. A special catalogue was created for the exhibition.