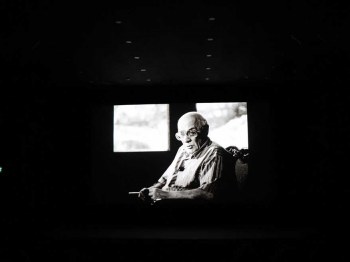 30 years have passed since April 9 tragedy of 1989. Due to this date film screening of the two films – “Akaki Bakradze’s Standpoint” and “Merab Mamardashvili’s Standpoint” – of the documentary trilogy “The Way Home” was shown in the cinema hall of the National Archives of the Ministry of Justice of Georgia.

The film “The Way Home” was directed by Nikoloz Drozdov in 1990. More than two decades have passed, since the film was shown last.

Art historian, publicist Akaki Bakradze and philosopher Merab Mamardashvili talk in the documentary about the new reality of our country that was provided by the National Movement by the end of the 80s.

In parallel to the film screening photo exhibition on April 9 tragedy was held in the foyer of the cinema hall.