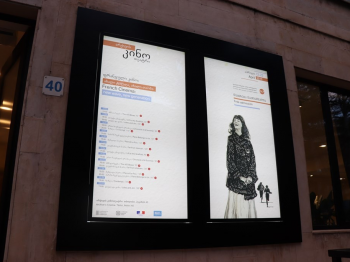 Retrospective of French films “French Cinema: New Wave, New Generation” was opened on April 12 at the cinema hall of the National Archives of the Ministry of Justice of Georgia. Event was hosted by Nino Dzandzava, deputy Director of the Audio-Visual Archive of the National Archives of Georgia, Pier Clue, Director of the French Institute in Georgia and Audrey Margueritte, coordinator of culture in French Institute of Georgia.

Retrospective is organized by the National Archives of Georgia, French Institute and the Embassy of France in Georgia.

Francois Truffaut’s “The 400 Blows” was shown on the first film screening. In the frame of the retrospective viewers will see eight feature films and documentaries in high quality, on original language, with Georgian and English subtitles.

New generation of directors showed up in 1950s. Part of them directly ascribe to “New Wave” or is associated to the innovative directions of the French cinema.  Films, directed by Francois Truffaut, Louis Malle, Jean-Luc Godard, Jean Rouch, Edgar Morin, Jacques Rivette, Chris Marker, Agnes Varda, and others, shown in the cinema hall of the National Archives, have defined the landmark changes in French feature and documentary cinematography.