The film was digitally restored at Georgian Resorts 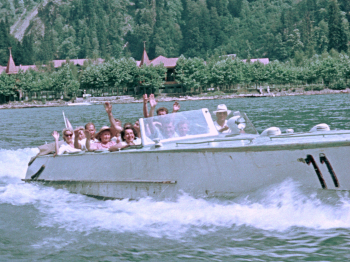 The National Archives of the Ministry of Justice of Georgia has undergone a digital restoration of the documentary "Georgian Resorts".

The color film shot by director Shalva Chagunava 61 years ago to popularize Georgian resorts had, in fact, lost its colors.

A high quality digital copy of the film was created on a 4K resolution scanner of the National Archives of Georgia. This allowed the film's restorers - Giorgi Kakabadze and Shalva Mikutishvili - to correct the color and light, digitally clean the damage, as well as clear and synchronize the sound. The restoration process lasted 6 months.

The 20-minute film "Georgian Resorts" presents mountain and sea resorts from different parts of Georgia. The author of the script is Ia Meskhi, the cameraman is Levan Arzumanov. The film was shot in the Georgian Chronicle-Documentary and Science-Popular Film Studio. The original of the film is preserved in the National Archives of Georgia.

In the future, it is planned to show the restored film to the general public, as well as to participate in archival film festivals.