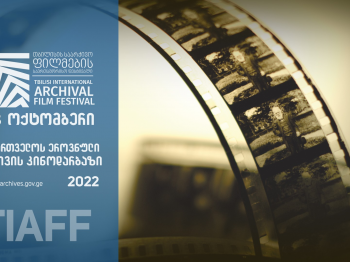 Georgian viewers will see the oldest examples of Georgian and foreign archival films at the Tbilisi International Film Festival of Archival Films. About 80 documentaries, Fictional, animated films and film chronicles from Georgia and 12 countries of the world will be shown in the cinema hall of the National Archive of the Ministry of Justice of Georgia (address: Vazha-Pshavela Ave. 1/Pekini Ave. 40) on October 5-8.

The films selected for the film festival were made by the Lumière brothers, the Skladanowski brothers, Jan Kříženecký, Vasil Amashukeli, Georges Méliès, Aurelio Paz dor Reyes, Jorja Palou, Octavian Miletić, Wim Wenders and others in the period 1895-1960.

The National Archive of Georgia is holding the Tbilisi International Archive Film Festival for the first time, and this year's theme of the film festival is the oldest film documents that have come down to us. Therefore, the participating countries - Germany, Italy, USA, Spain, Malta, Great Britain, Netherlands, Portugal, Czech Republic, Croatia, Moldova and France - film archives, film libraries and film museums present programs of ancient films preserved in their collections.

The program of the film festival can be found at the link: https://archive.gov.ge/ge/movies