The Transcaucasian Republic and Sejm – Exhibition and Conference 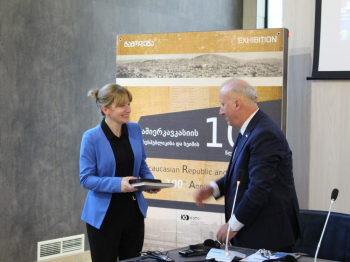 “The 100th Anniversary of the Transcaucasian Republic and Sejm” - the Second International Conference and exhibition of the historians of the Polish-Georgian commission was opened in the Exhibition Pavilion of the National Archives of the Ministry of Justice of Georgia.

The event was opened by the general director of the National Archives, Teona Iashvili and the Polish Ambassador in Georgia, Mariusz Maszkiewicz.

100 years have passed since the establishment of the legislative body of Transcaucasia – Sejm and Republic. The exhibition and the conference are only a part of the events dedicated to the 100th anniversary of the First Republic of Georgia, which are to be held by the National Archives throughout 2018.

Important documents and photos of the Republic, kept in the Archives, are presented at the exposition.

Alongside with the opening ceremony, presentation of the new issue of the scientific journal “Pro Georgia” of the faculty of Kartvelian studies at Warsaw University, was also held.

The exhibition “100th Anniversary of the Transcaucasian Republic and Sejm” will last till May 3.