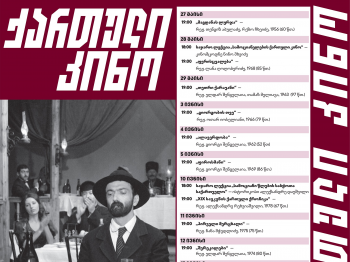 "Georgian Cinema of the 60s" - a retrospective of restored Georgian films will be held at the Cinema Hall of the National Archive of the Ministry of Justice of Georgia from May 27 to June 19.

Distinctive works of digitally restored Georgian cinema classics will be presented at the screenings organized by the Georgian National Film Center and the National Archives of Georgia. The program will be opened on May 27, at 19:00 by Tengiz Abuladze and Rezo Chkheidze "Magdana Blue". As part of the retrospective, the viewer will see feature films: Lana Ghoghoberidze's "Transfiguration", Eldar Shengelaia and Tamaz Meliava's "White Caravan", Otar Ioseliani's "For St. George", Giorgi Shengelaia's "Alaverdoba" and "Pirosmani", Alexander I Rekhvia19 Mchedlidze's "First Swallow", Eldar Shengelaia's "Sherekilebi", Merab Kokochashvili's "Big, Green Valley" and Rezo Esadze's "Love at First Sight" will close the retrospective of Tengiz Abuladze "Repentance."

The films have been restored in cooperation with the Georgian National Film Center and the National Archives. Attendance at film screenings is free