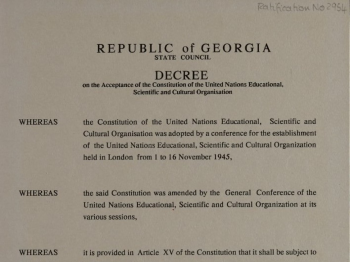 The National Archives of the Ministry of Justice of Georgia has received a digital copy of the document –  - the ratification of the UNESCO Constitution by Georgia as a member state – signed by Eduard Shevardnadze in Tbilisi on August 14, 1992.

In 2021, the United Nations Educational, Scientific and Cultural Organization celebrates its 75th anniversary. On this date, in order to inform the general public, the organization sent a ratification document to the UNESCO Constitution to each member state.

The Constitution of the United Nations Educational, Scientific and Cultural Organization was adopted in London on 16 November 1945. The document entered into force on November 4, 1946 in Paris. Georgia became a member of UNESCO on October 7, 1992.