Vazha-Pshavela considered his date of birth to be May 15, 1862, despite this, another date is established in his biography - July 14, 1861 (old style). The basis for this is the 1861 metric book of the Church of St. George of the village of Chargli preserved in the National Archives of Georgia.

The writer devoted a special publication to this issue in the "People's Gazette" N584 of 1912: "A small note".

"If a biography is written, it should be written with the truth, moreover, the falsity should be corrected during my lifetime, because it will happen even after my death. I was born in the village in Chargali in 1862 On May 15..."

Vazha-Pshavela wrote about his parents in his autobiographical work:

"I am from St. Pshaveli, both on my mother's side and on my father's side. My mother was an Ivre woman, from the village of Skhlovni, of the Phkhikliant family. He created satirical poems and even today all the people of Pshave "poem" to his tune; Unfortunately, he did not know how to read and write, so his works were preserved thanks to paper, although his poems are still alive today, and people sing them. These poems are full of deep humor. My mother didn't know how to read and write either, although she was very talented by nature, an excellent housewife and merciful, a good reader, a neighbor's helper; Dedi-Chem's kindness remains exemplary even today. He went to the grave in such a way that no one remembers him, no.

When I knew my father, he was the chief deacon of the village. Magharoskar, S. Eight verses away from Chargali. Whenever he was at home, he always told me stories from the old divine history, taught me how to read and write in the old way. He would put the meat on the board as a plate for the meat, and I would also sit on the throne and listen to his sweet talk, because I liked some stories from the Old Testament, they attracted my attention: the defeat of Goliath by David, the actions of the mighty Samson, the dedication of the Maccabean brothers, etc. ... and I must also mention that my head was strongly presented to Samson, because my mother said about me that I had big hair, when I was born, it almost covered my eyes, and I used to ask: why did you braid my hair, Still, this "hairiness" made me think about myself, made me see myself as an extraordinary person and set an extraordinary future for me."

Students and teacher of Telavi Theological Seminary, Niko Mungolashvili. Vazha-Pshavela sits 3rd from the right in the first row. [1870-1872]

Vazha-Pshavela received primary education in her family, and at the age of 8, "my father enrolled me in Telavi theological school. From the third grade of this school, I entered the Civil School of Tbilisi, which is located next to the institute. After finishing the course at the civil school, I entered the seminary of Gori. When I finished my studies there, I was appointed a teacher in Toladsofel (Ertso), where I stayed for one year and then I went to St. Petersburg to listen to lectures at the university..." ("People's newspaper", "Small Note", 1912. N584).

Ekvtime Takaishvili wrote in his memoirs about his studentship:

"I met Vazha-Pshavela for the first time in St. Petersburg, when I entered the university, he came as a free listener and attended a session of Georgian students on community issues. He knew by heart a poem from the folk poetry of Pshav-Khevsureti. He didn't have any notebooks or written documents in his hands and we were all amazed how he could memorize so many poems."

Vazha-Pshavela's stories were printed as a book for the first time in 1889. In 1896-1898, several more books were added to the first edition, including "Amodis, Natdeba" and "Akhundi", which are kept in the scientific reference library of the National Archives of Georgia. 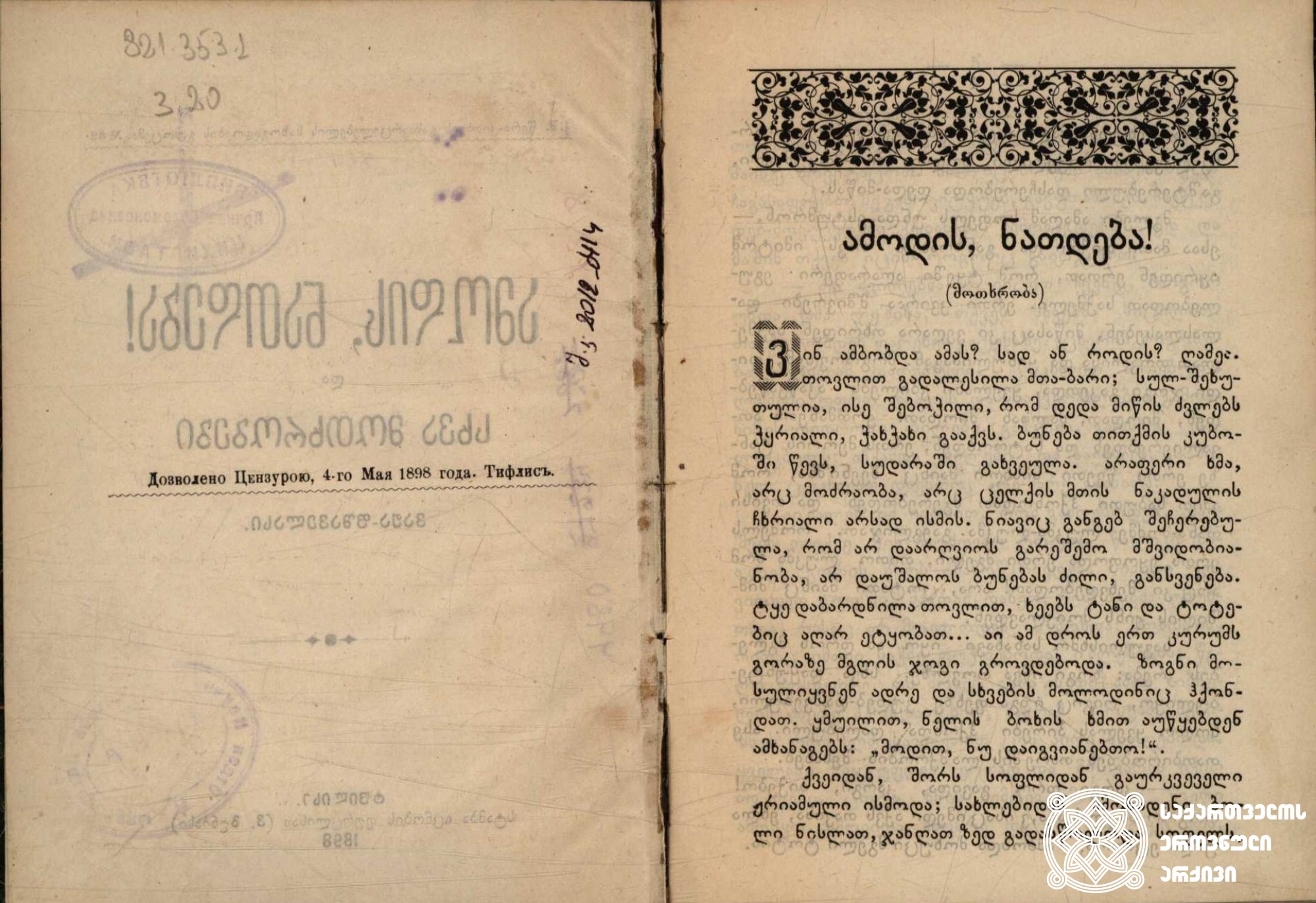 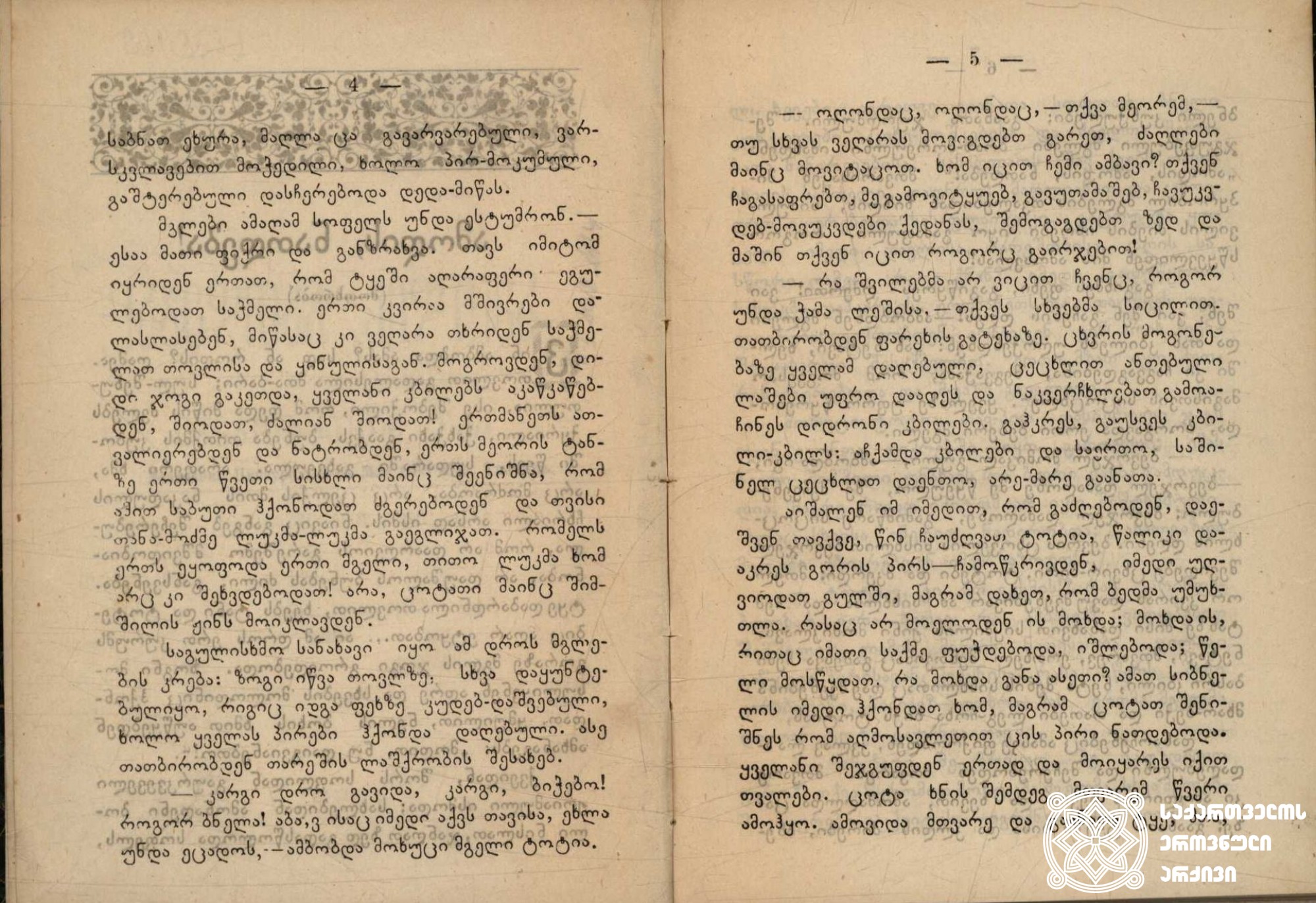 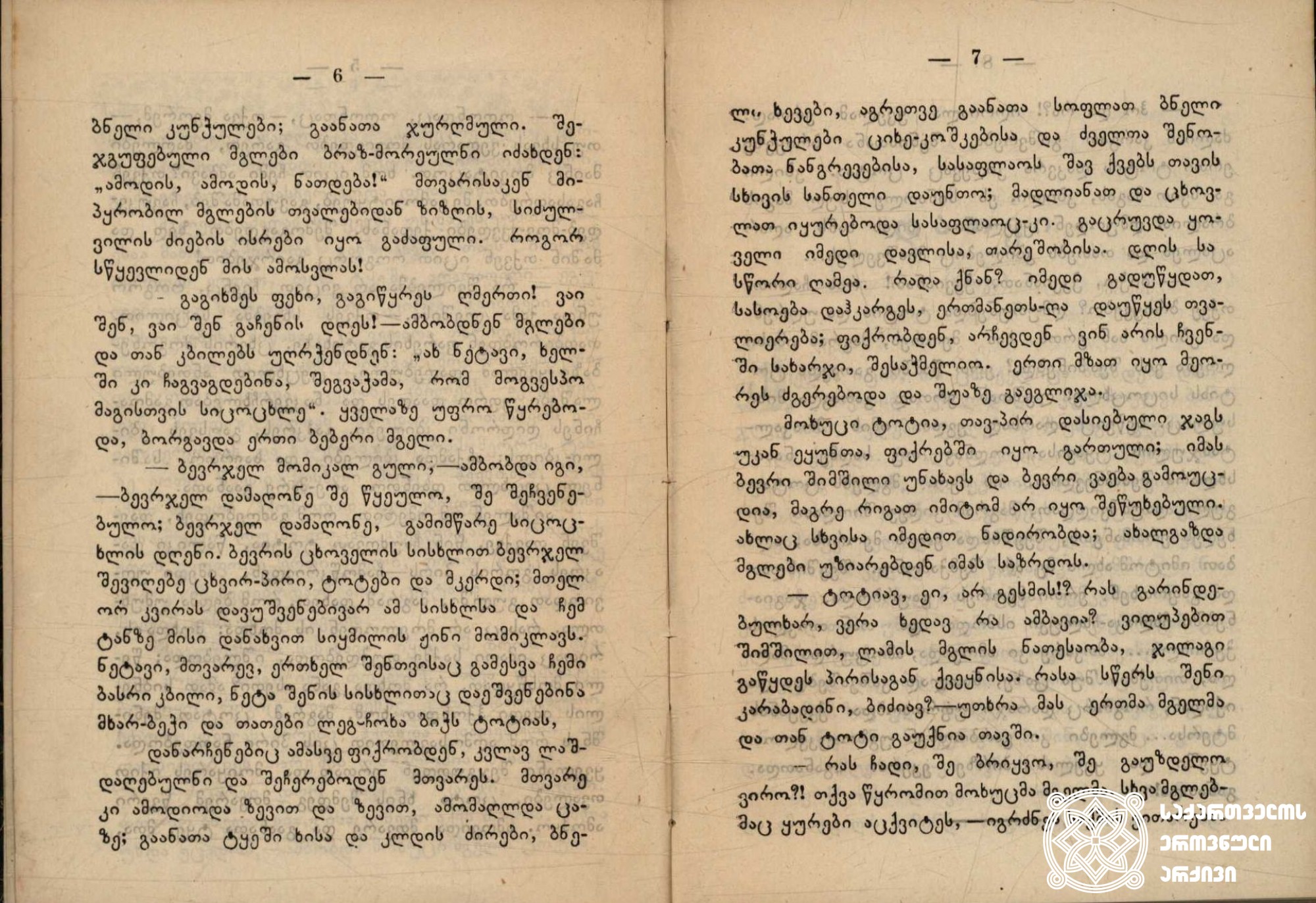 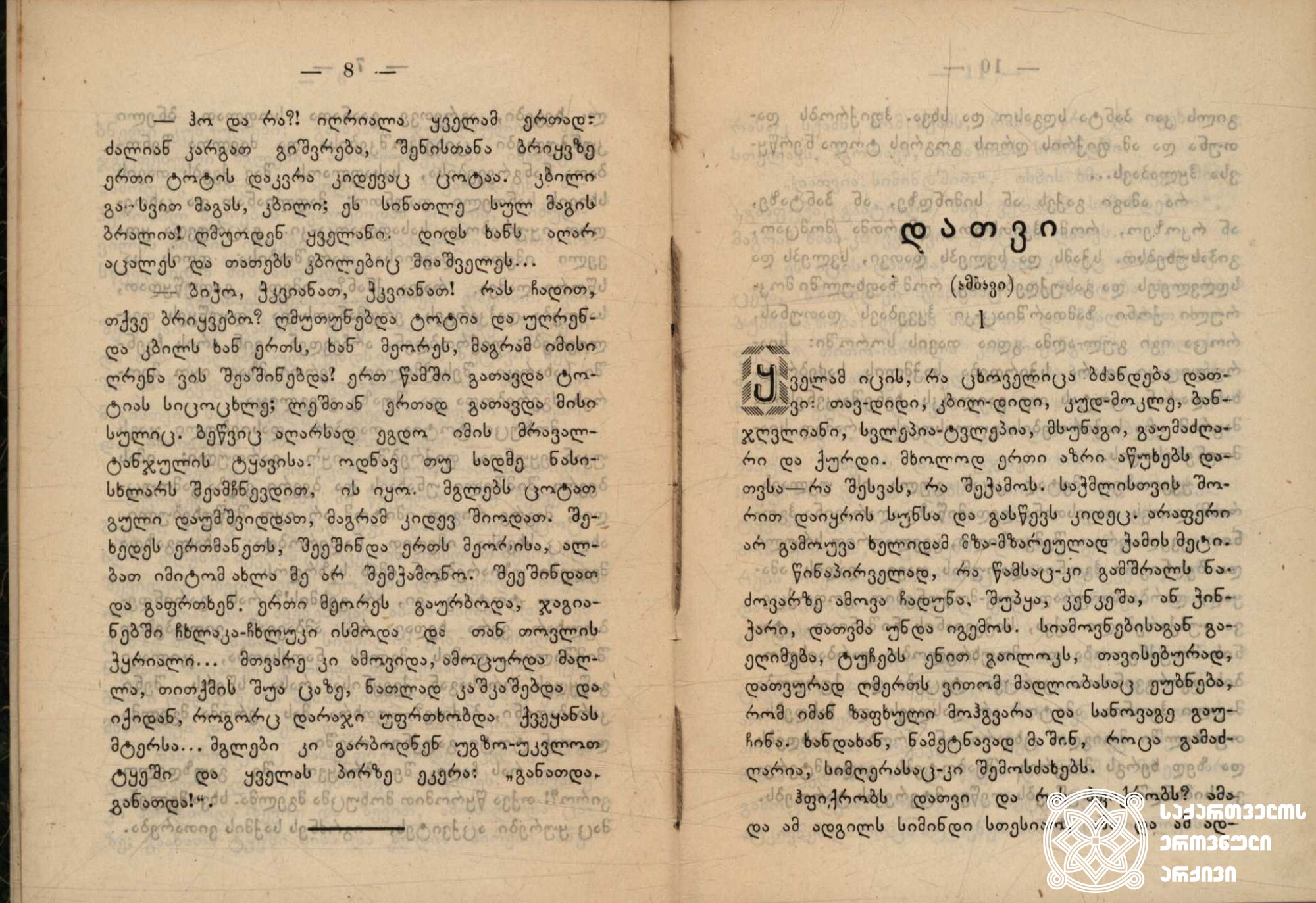 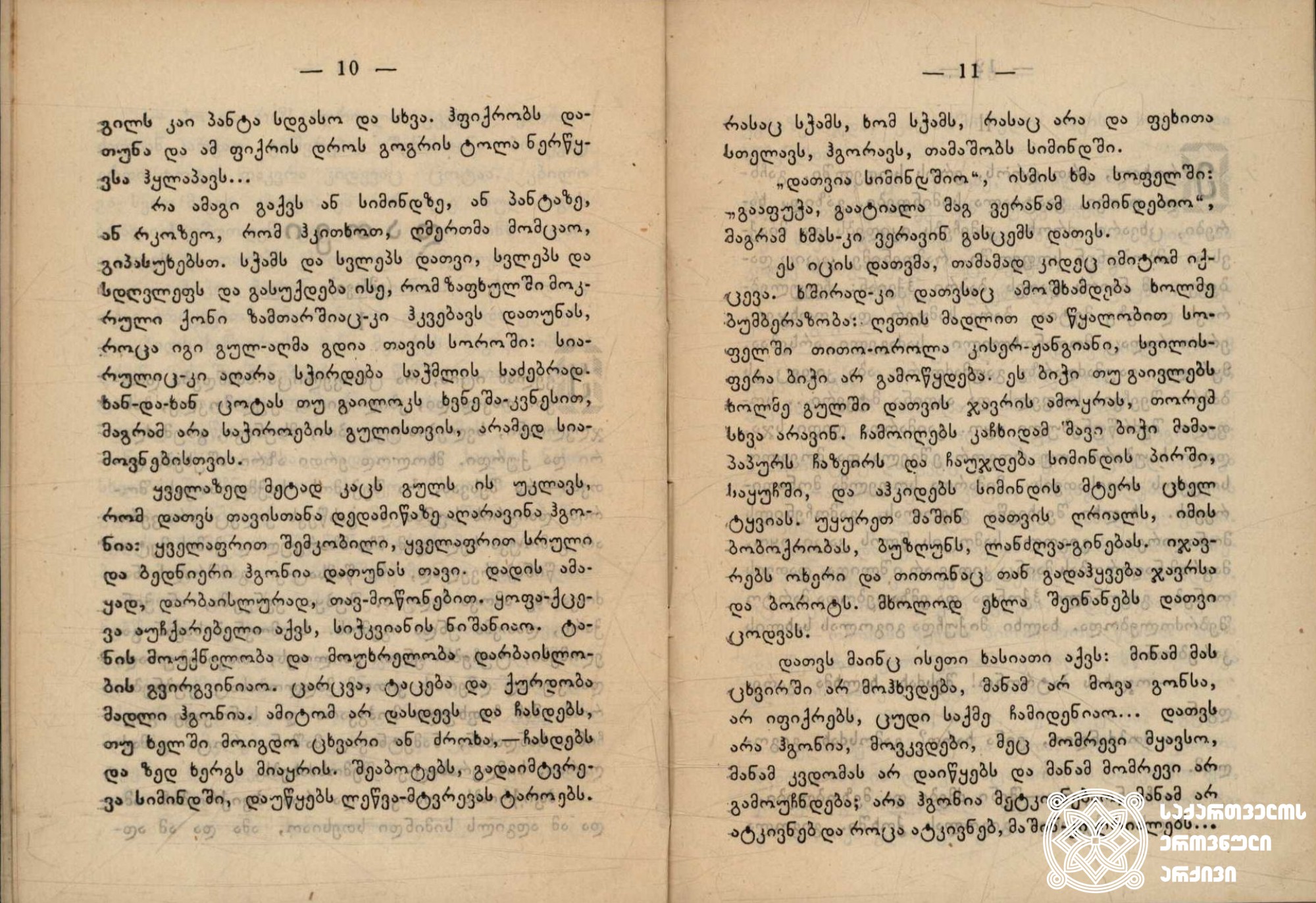 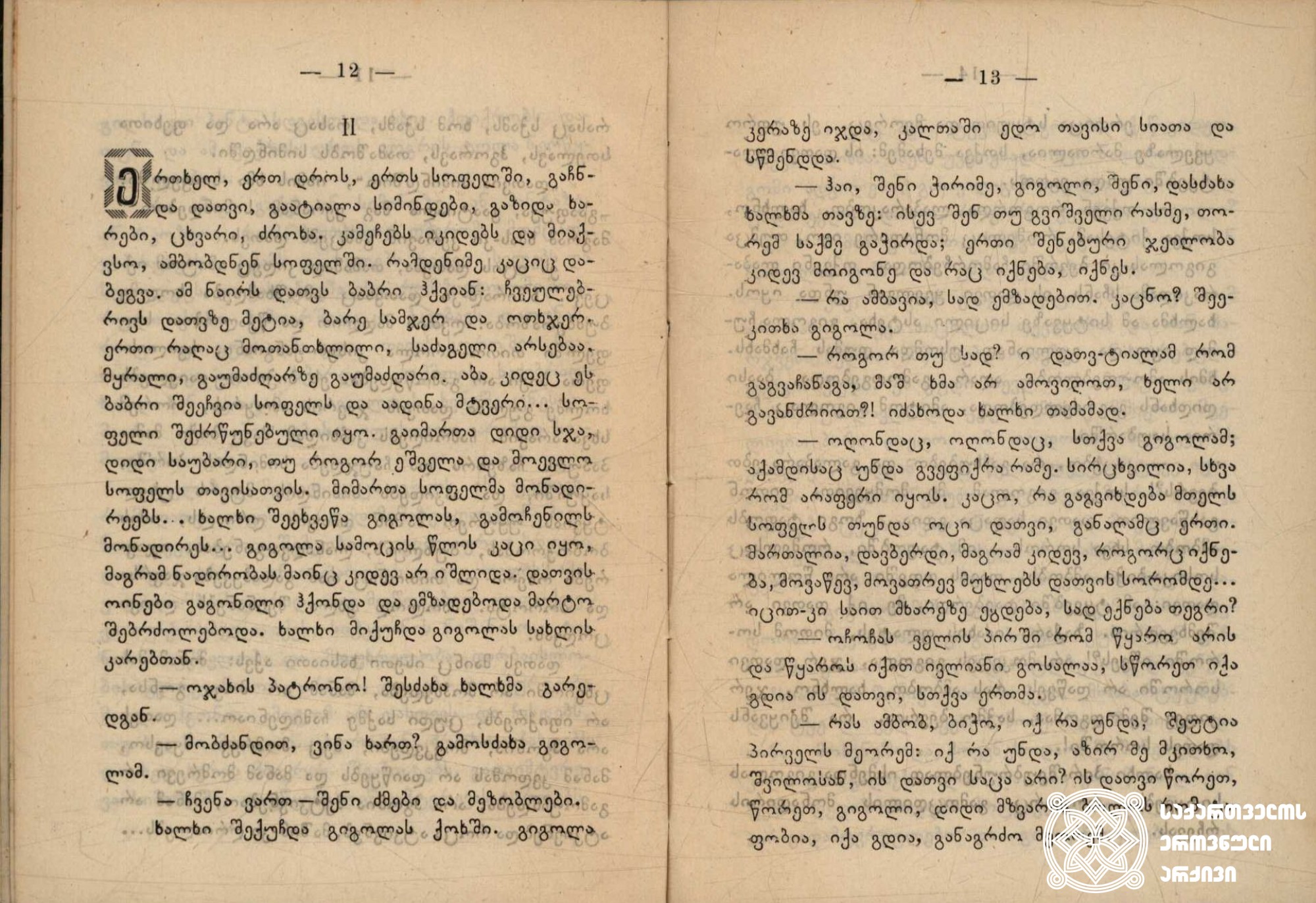 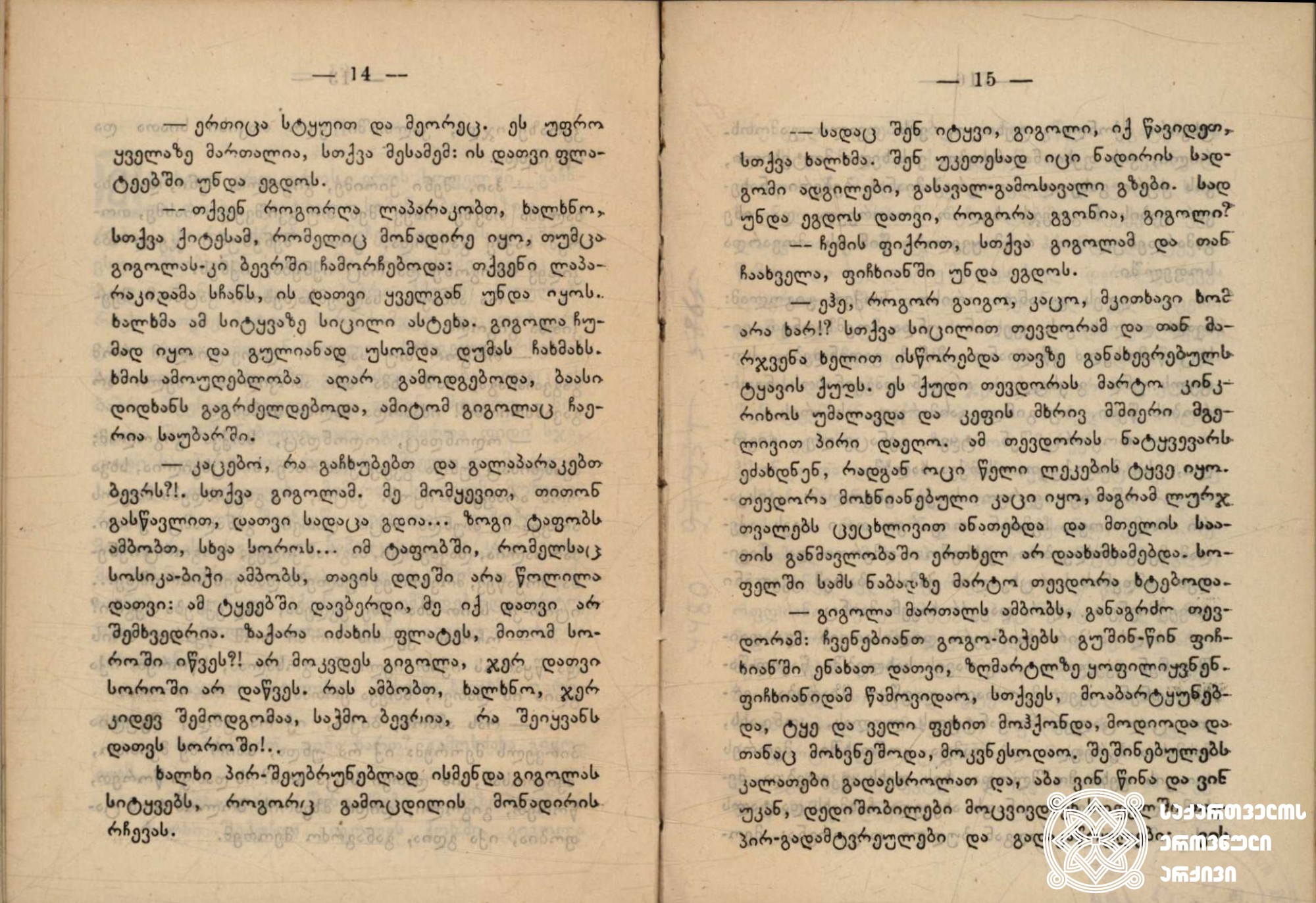 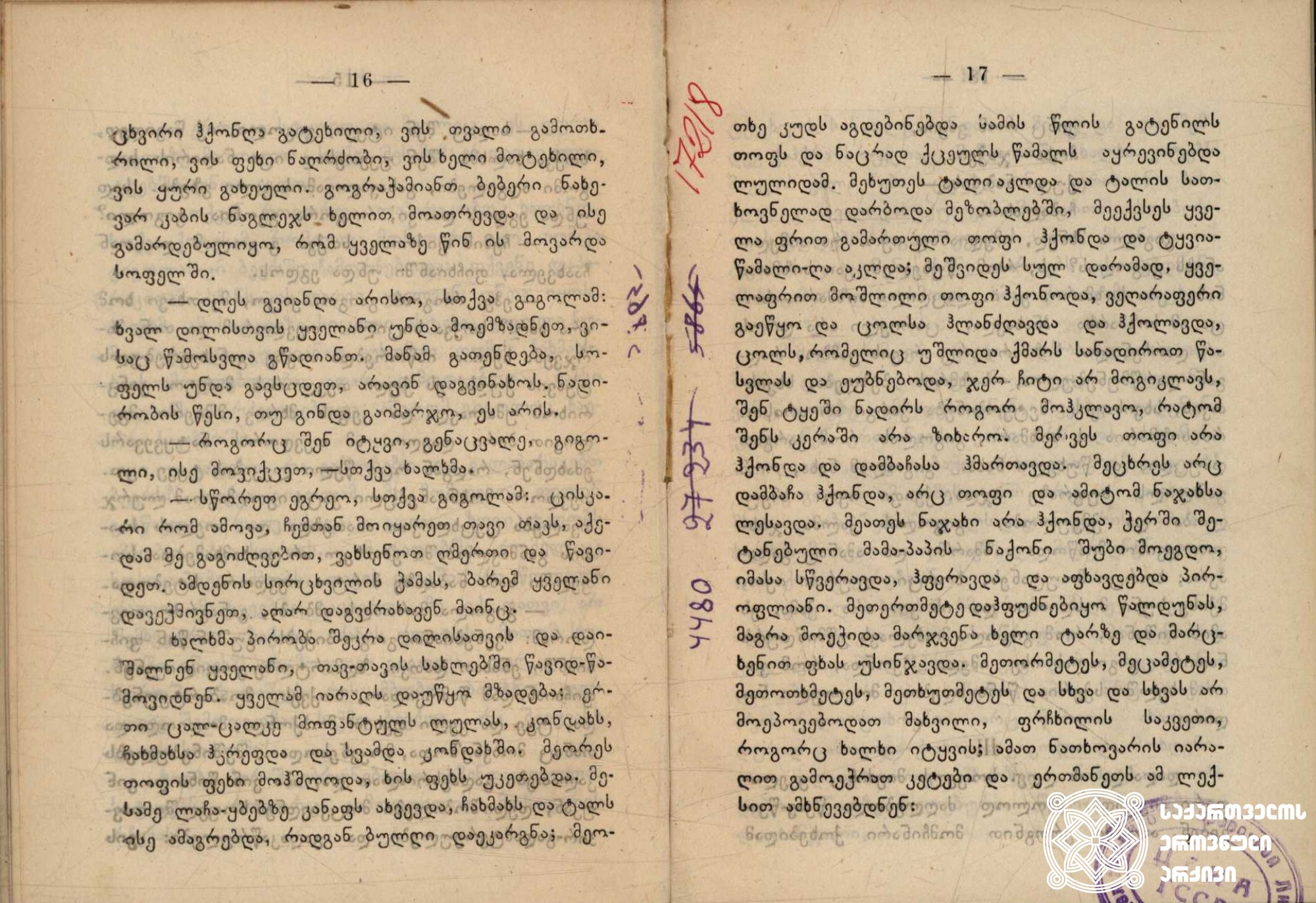 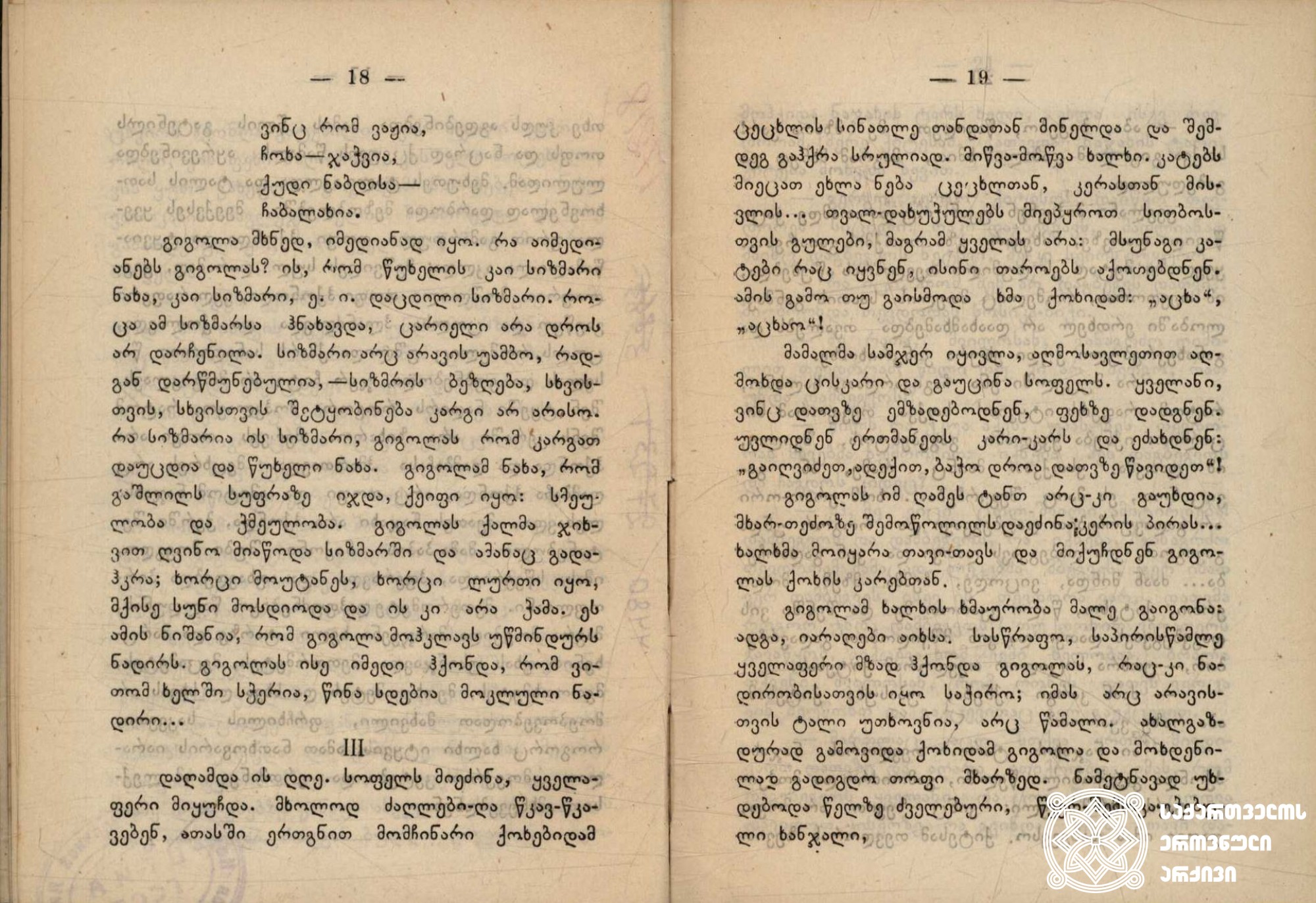 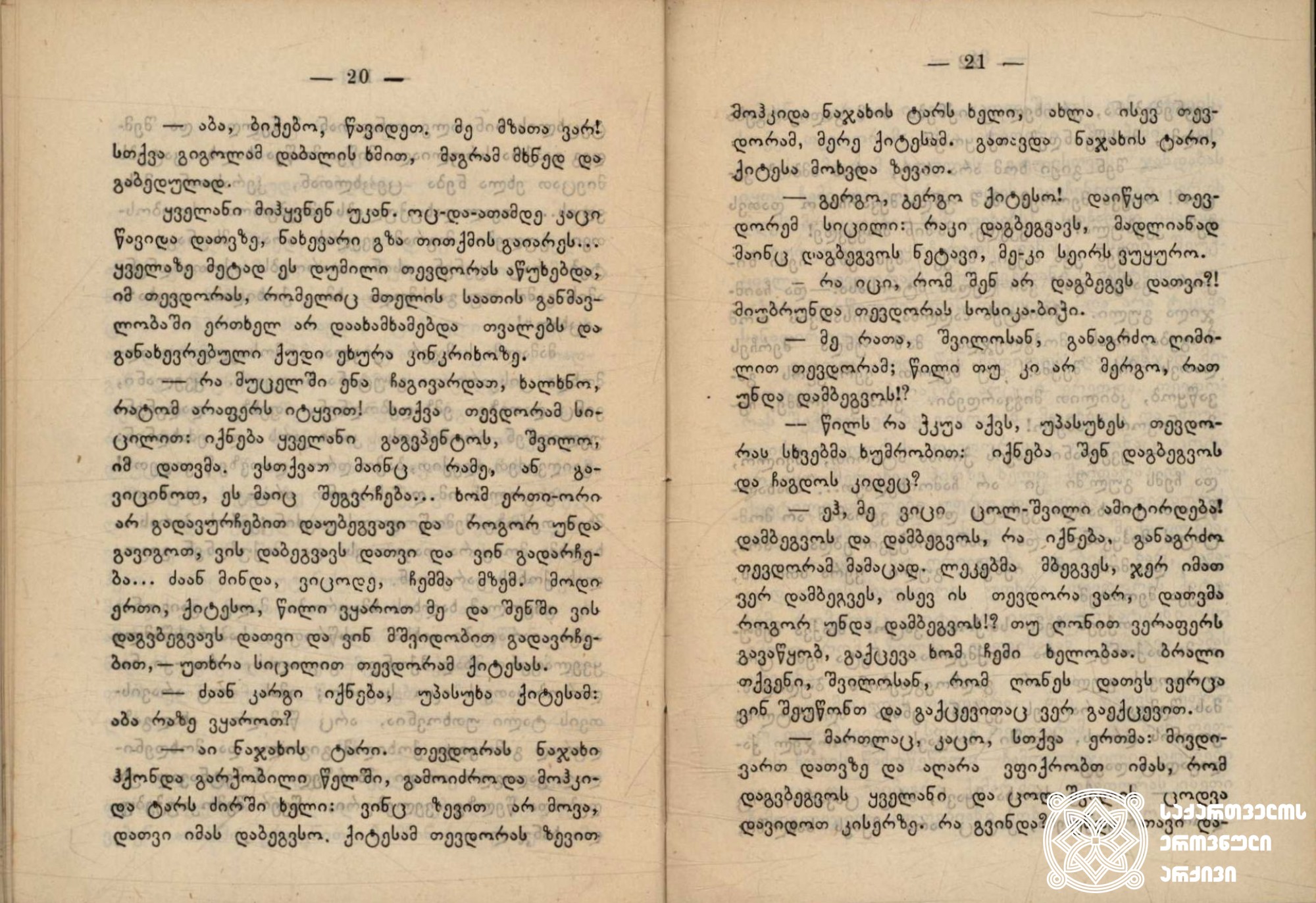 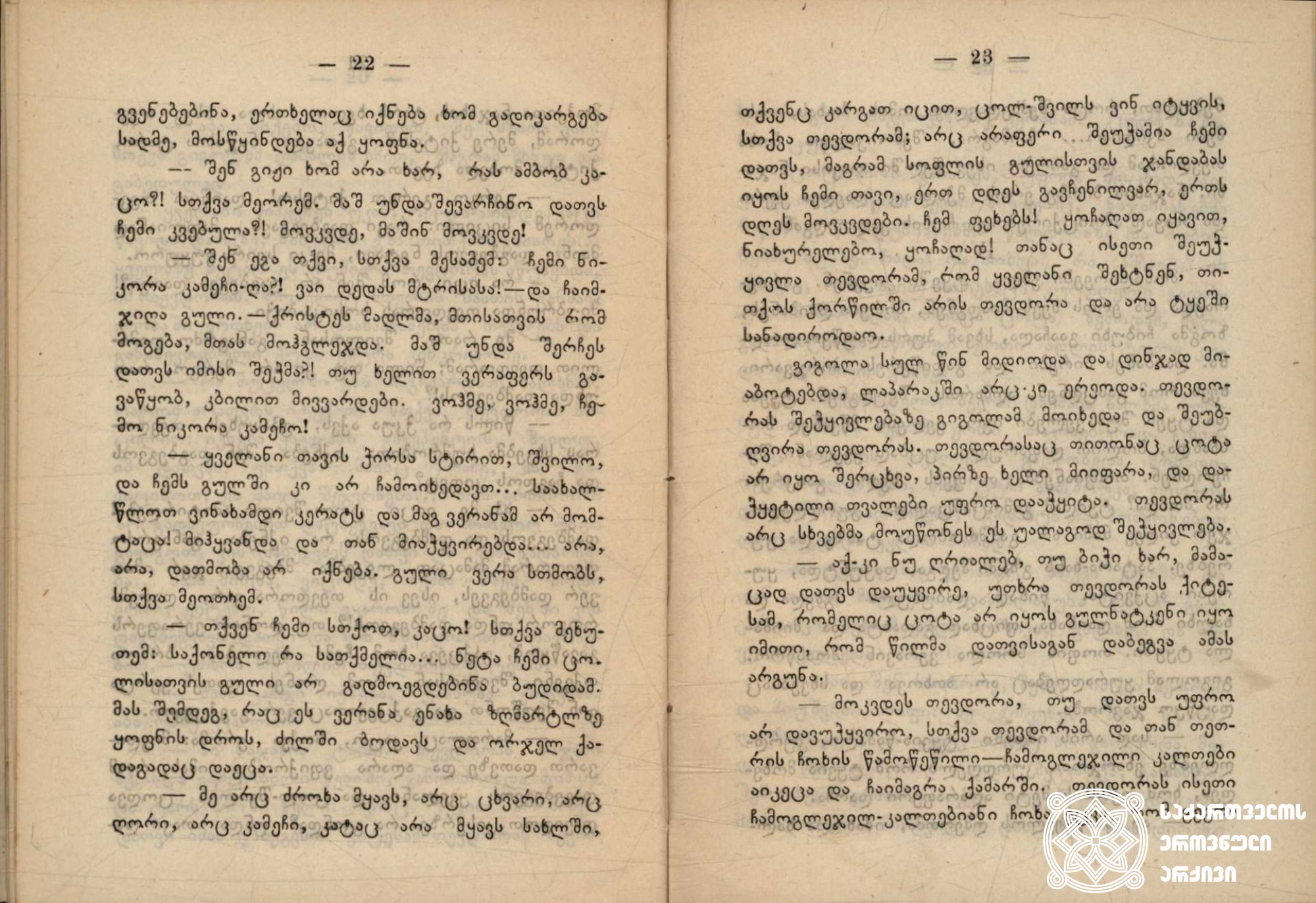 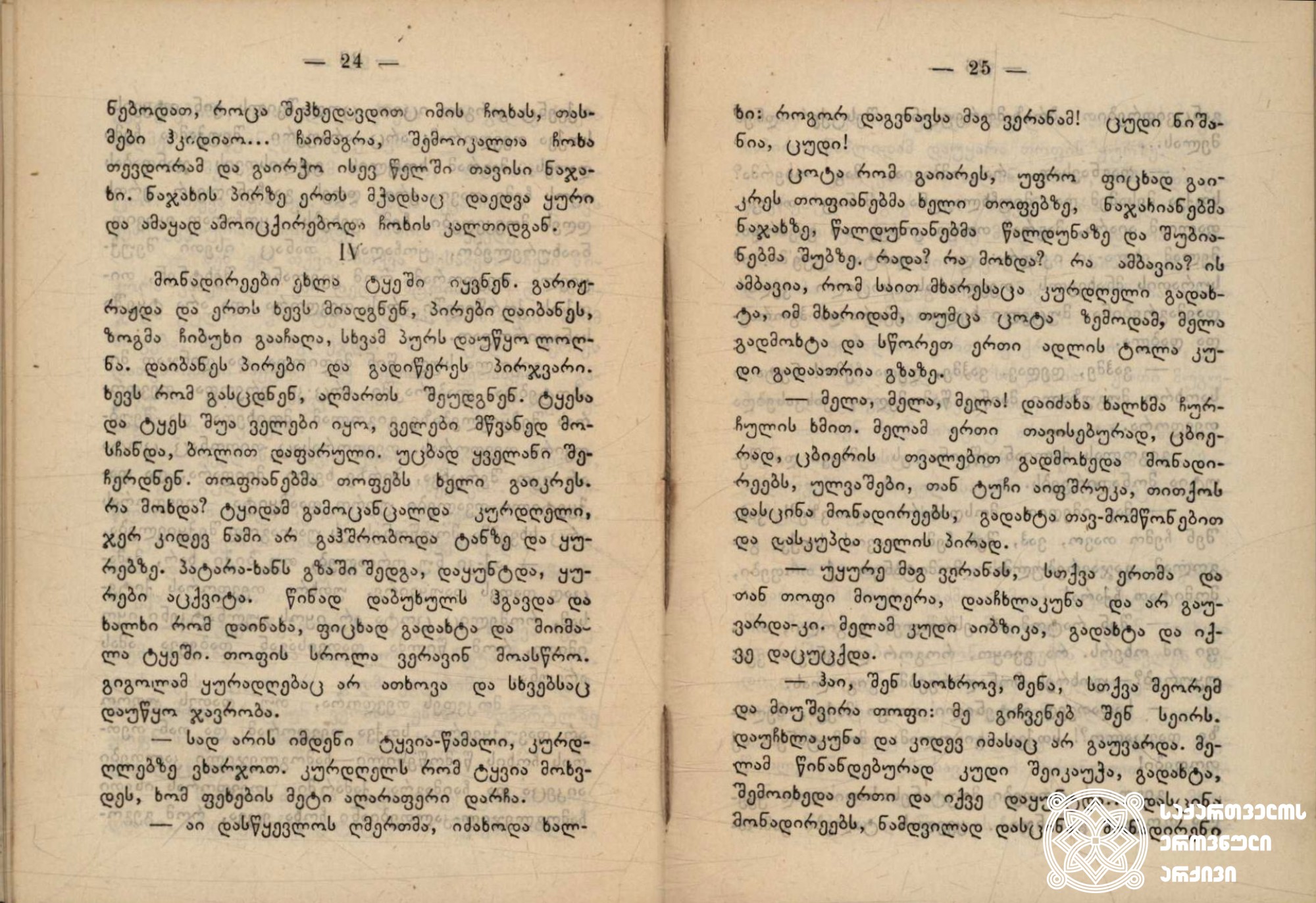 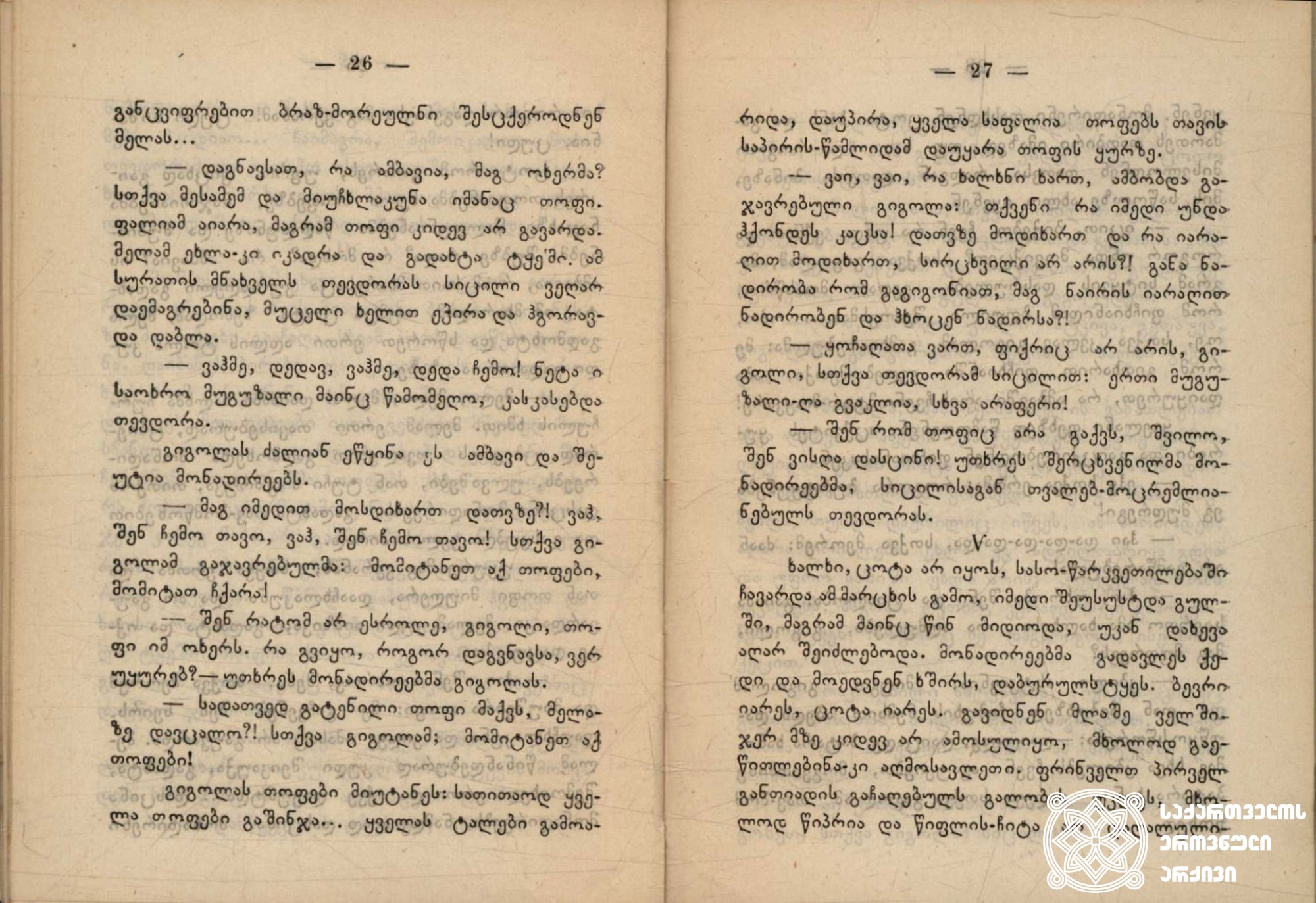 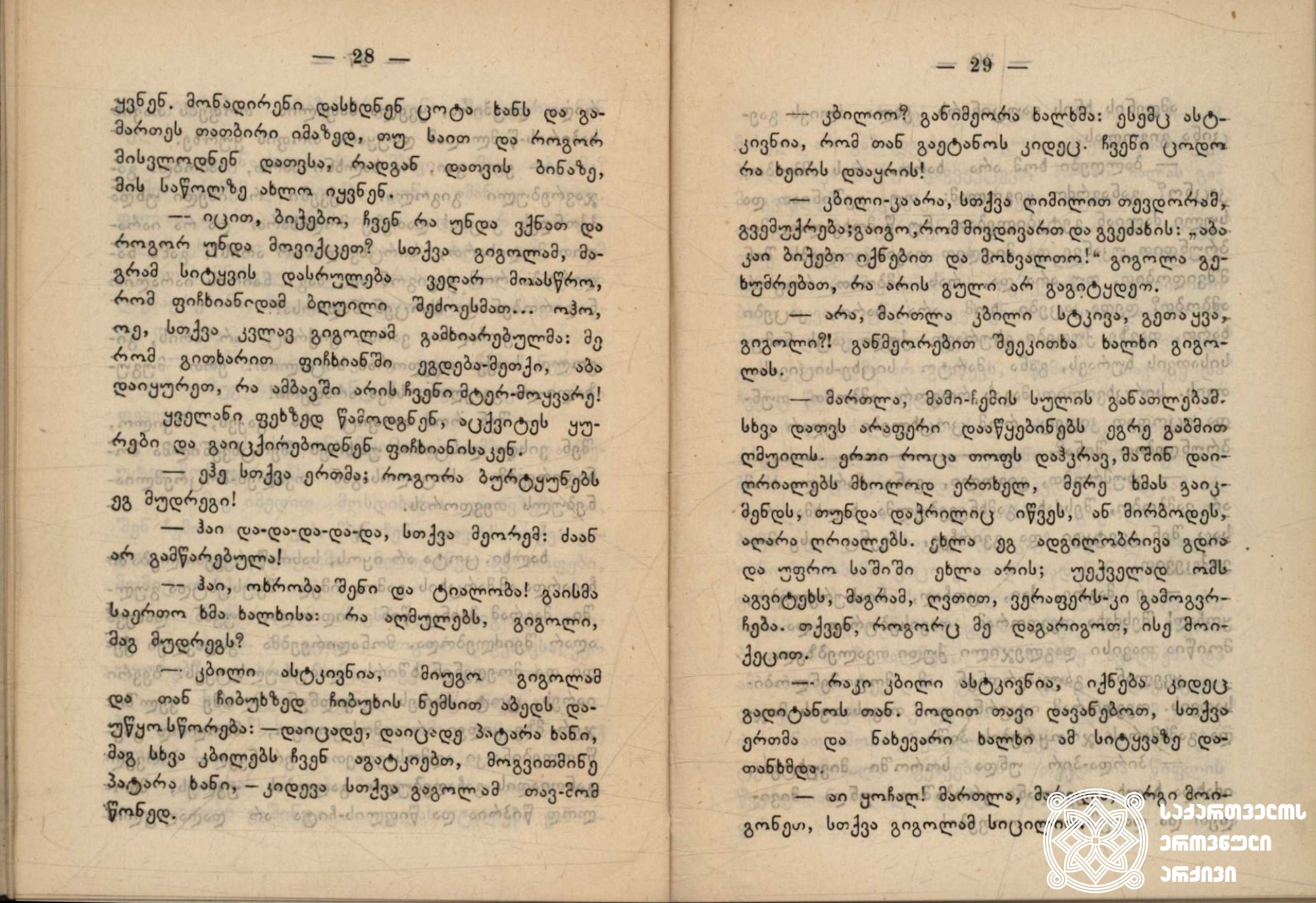 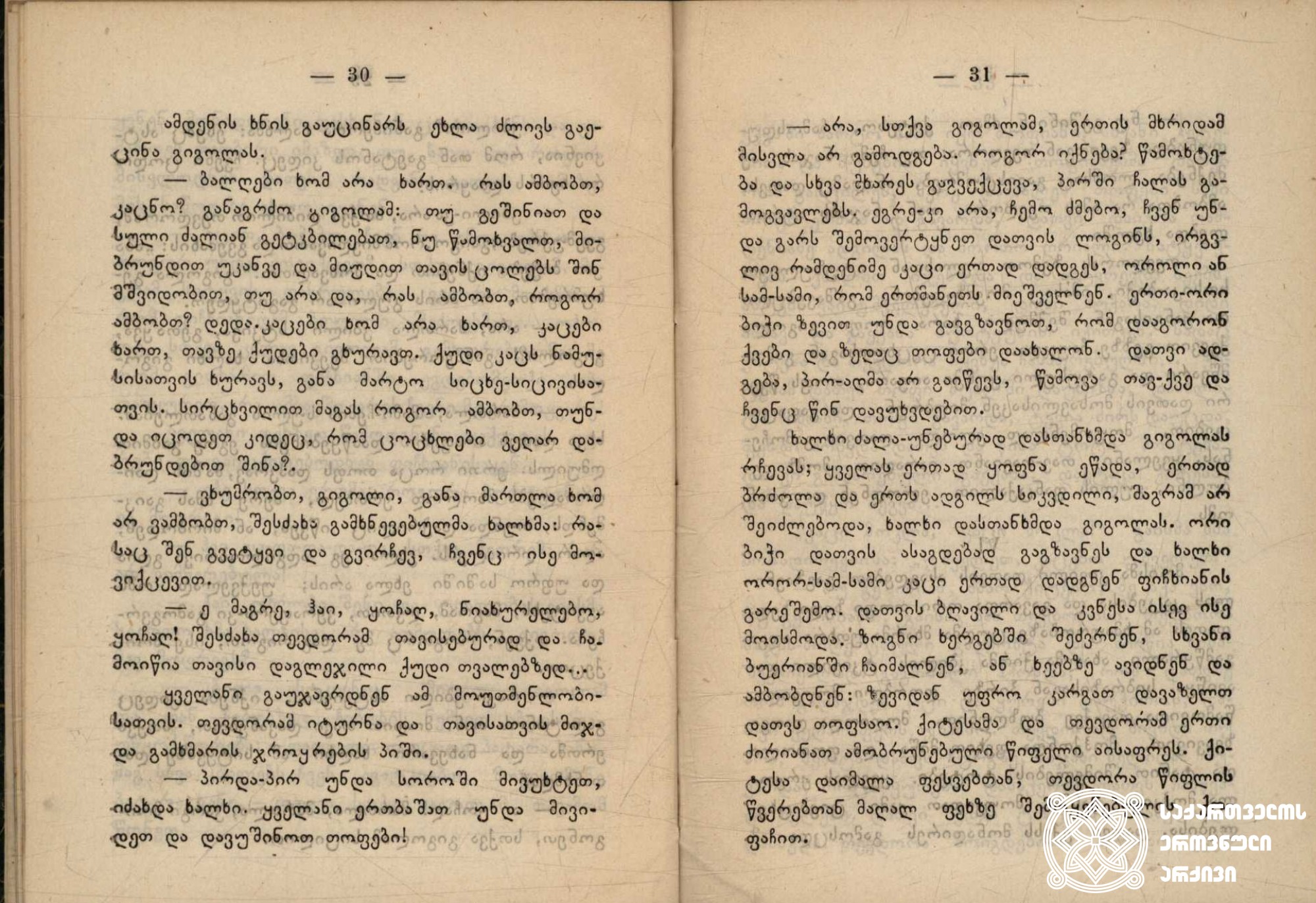 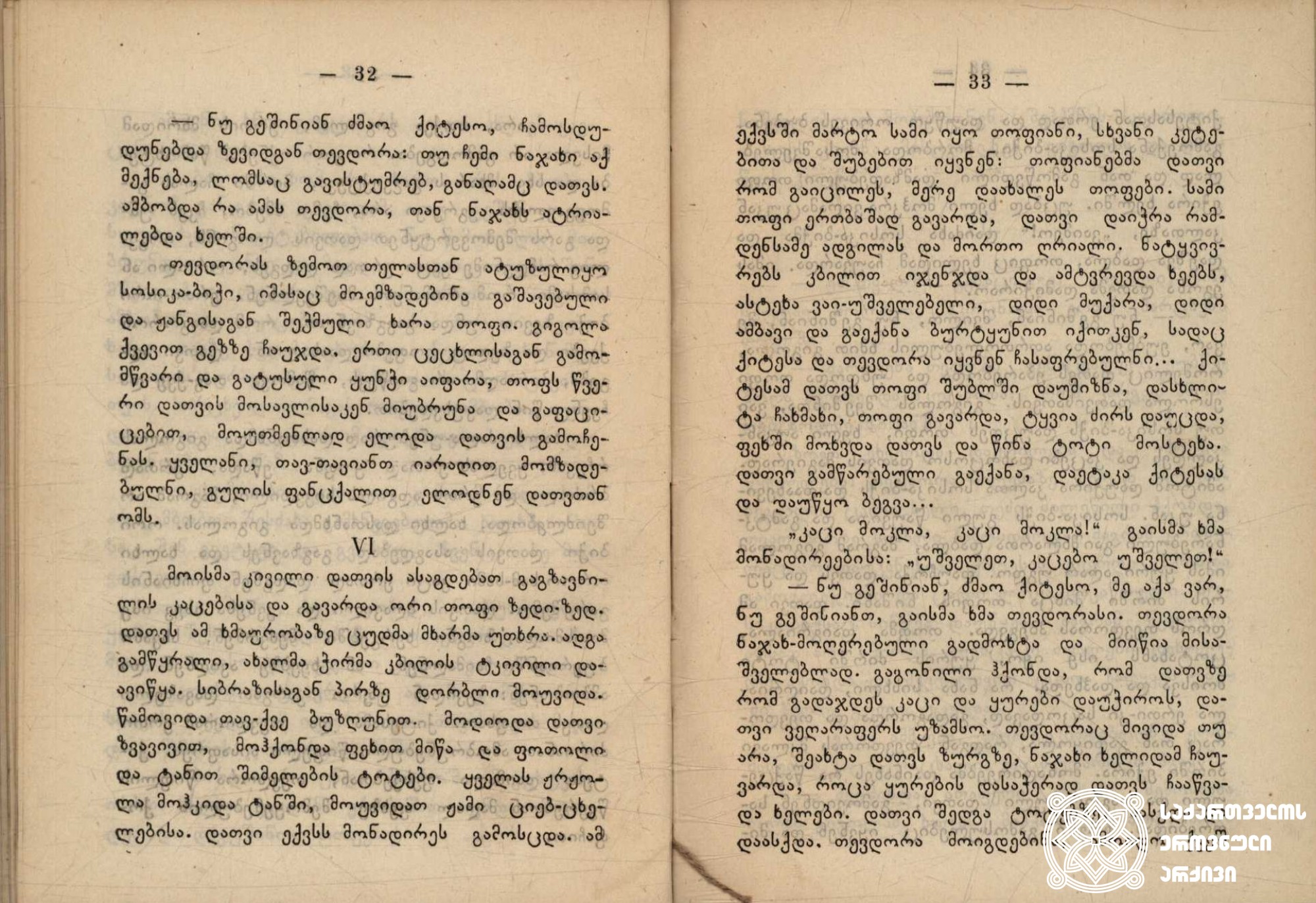 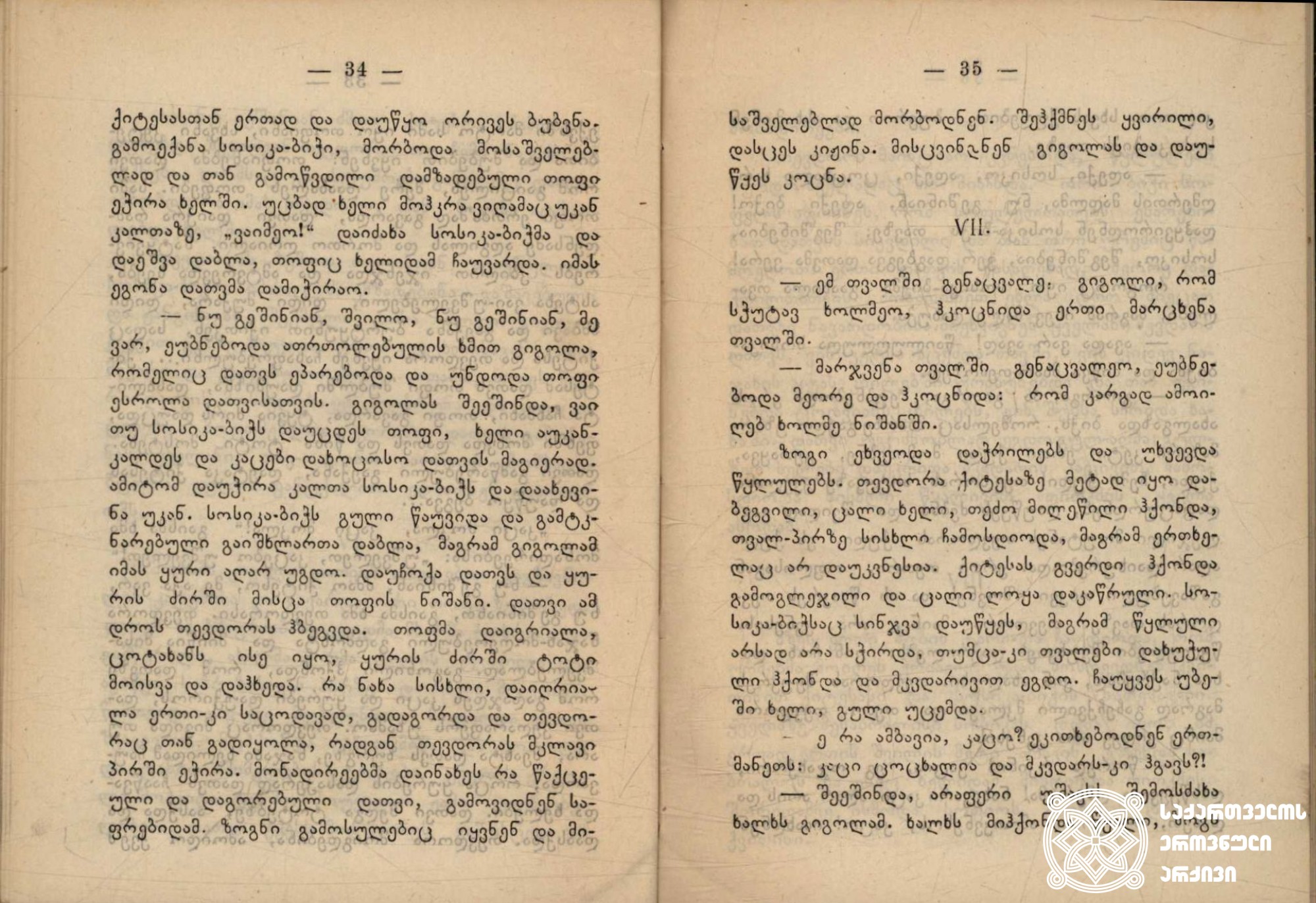 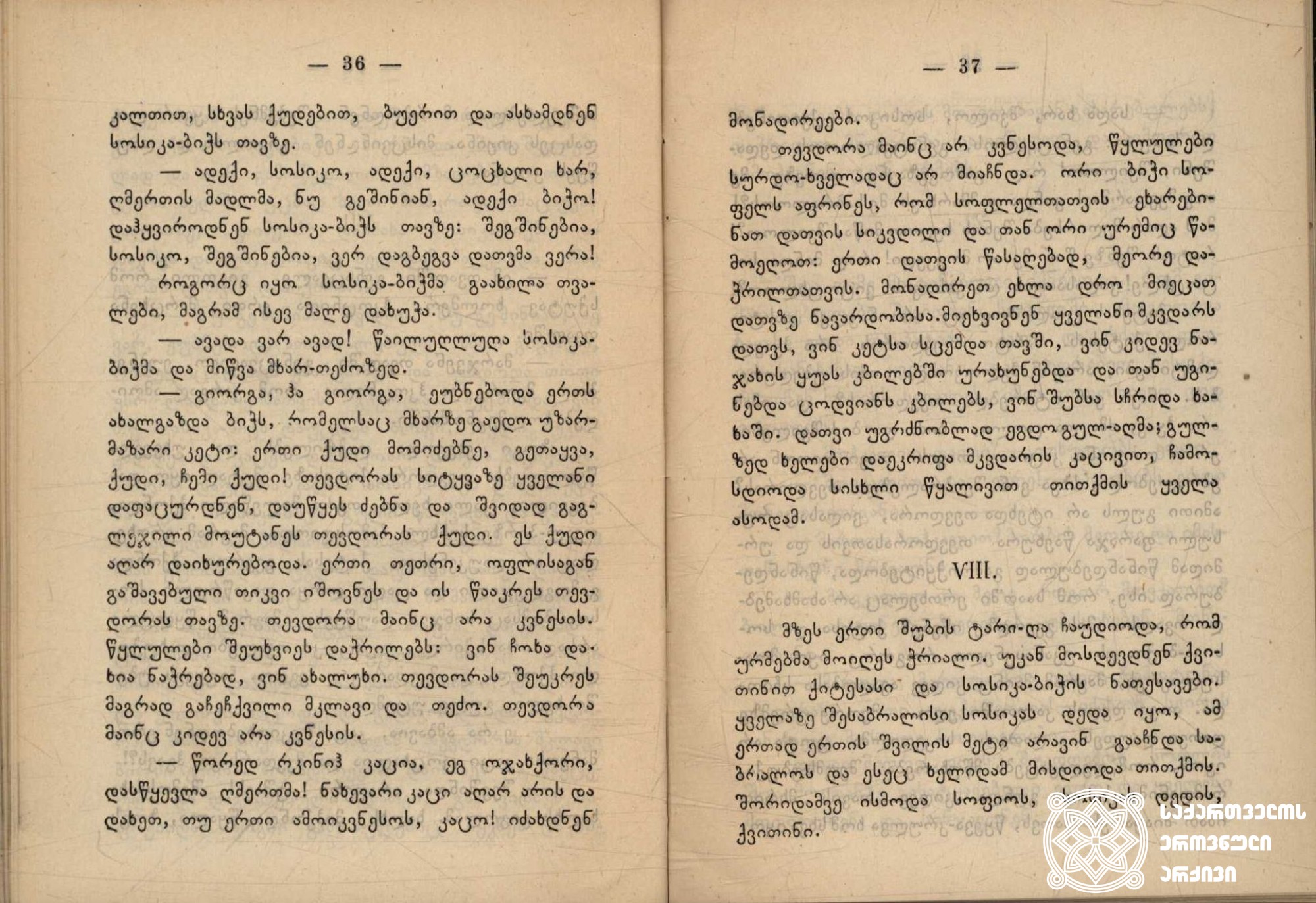 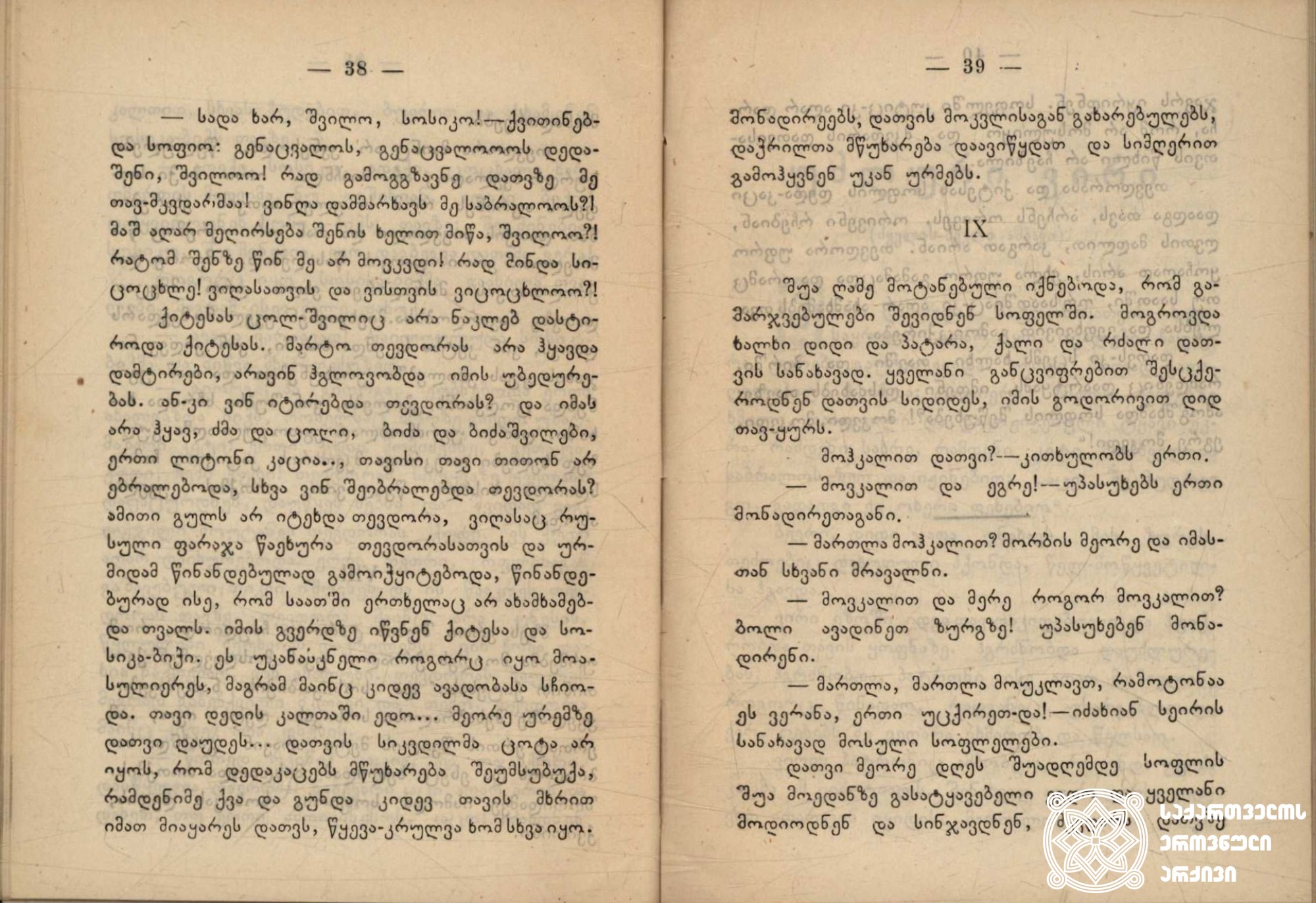 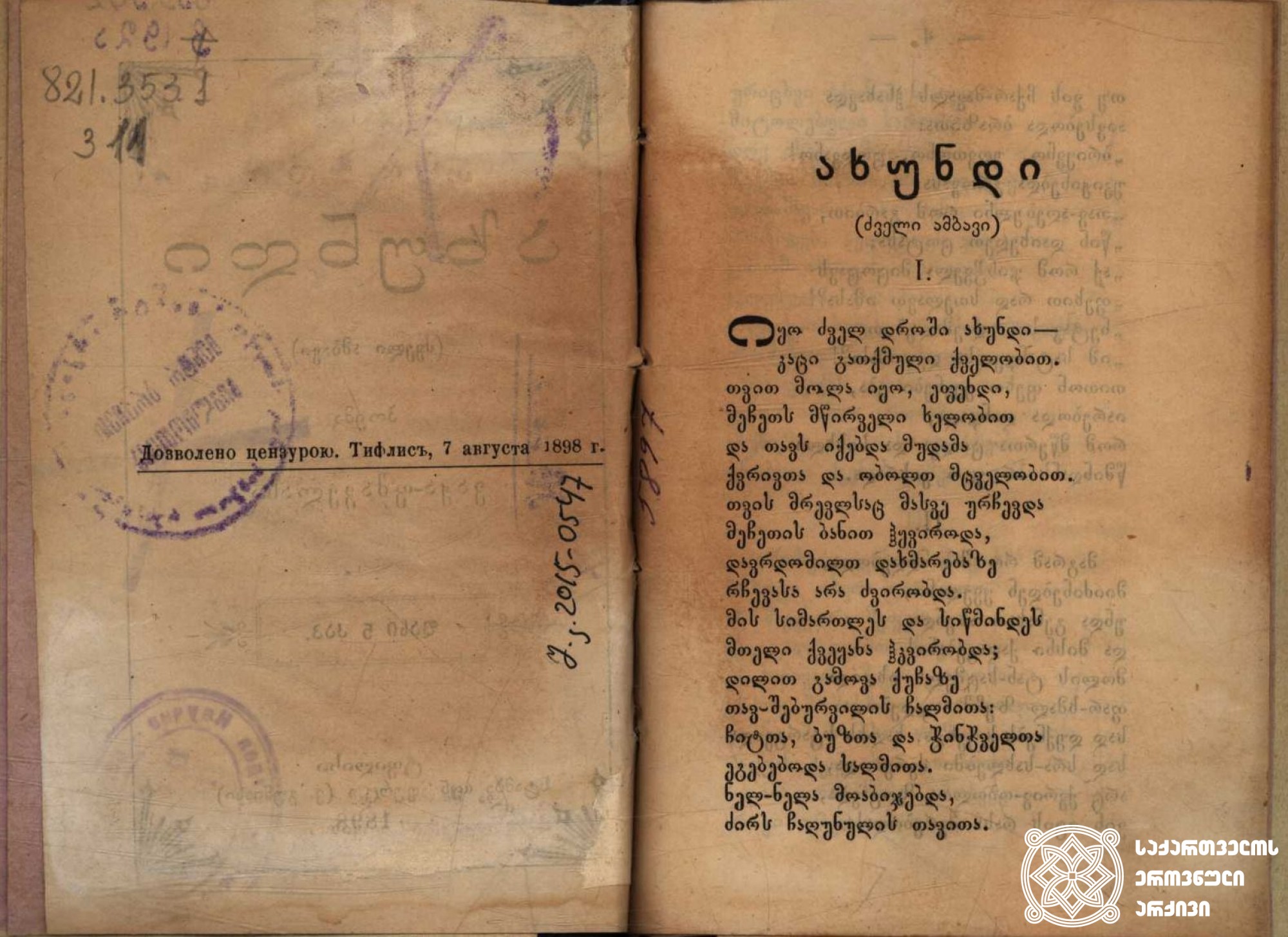 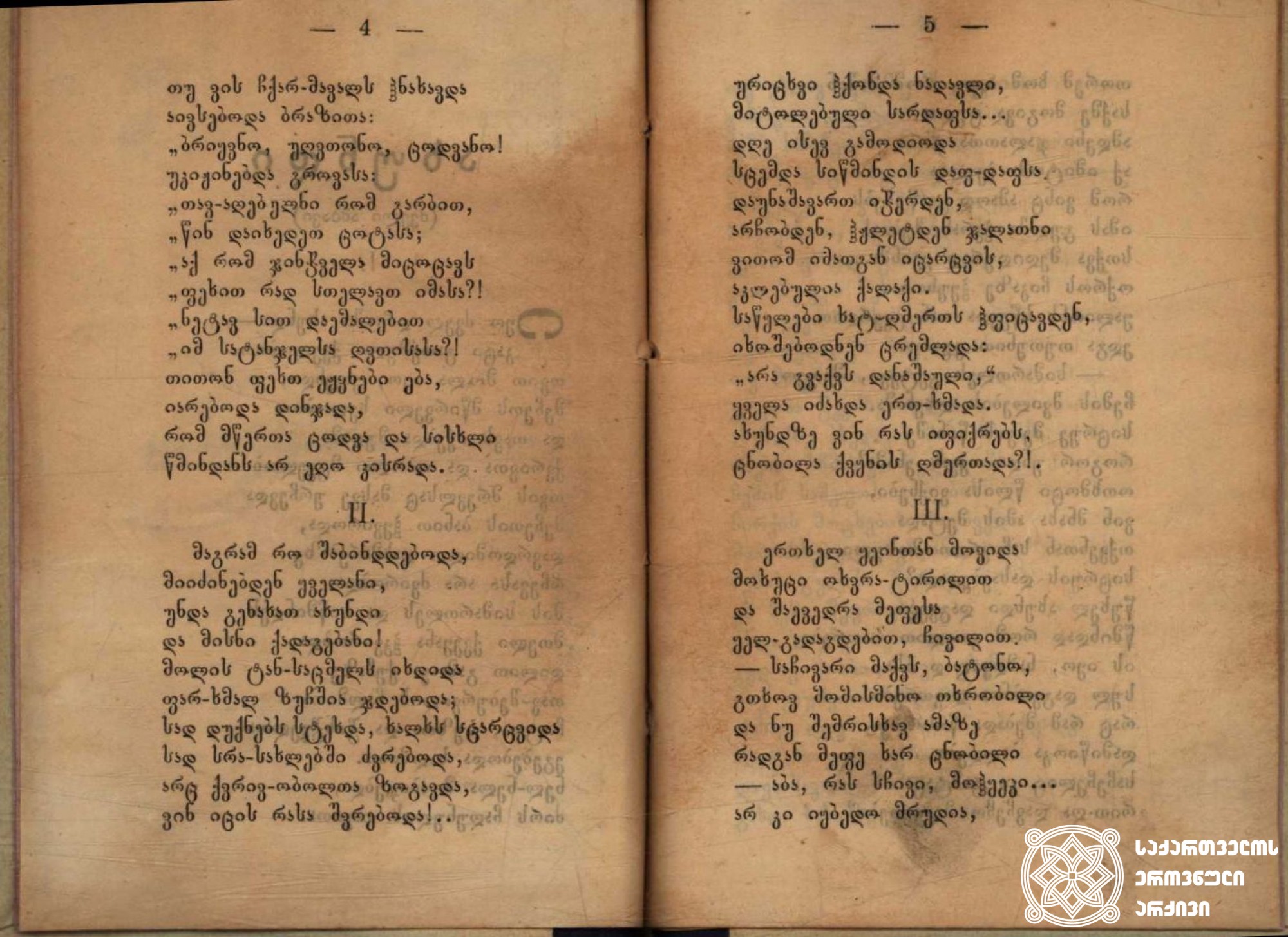 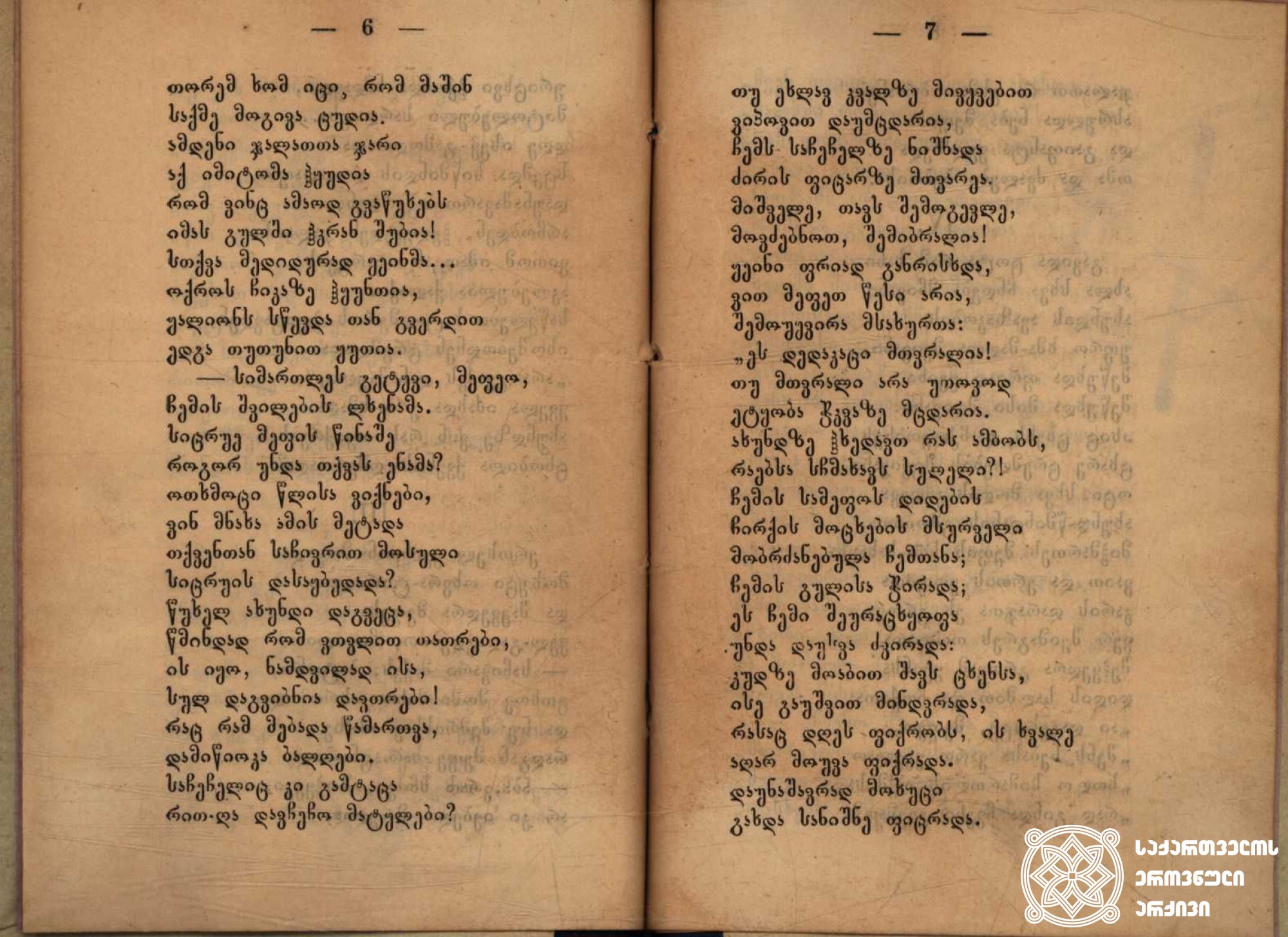 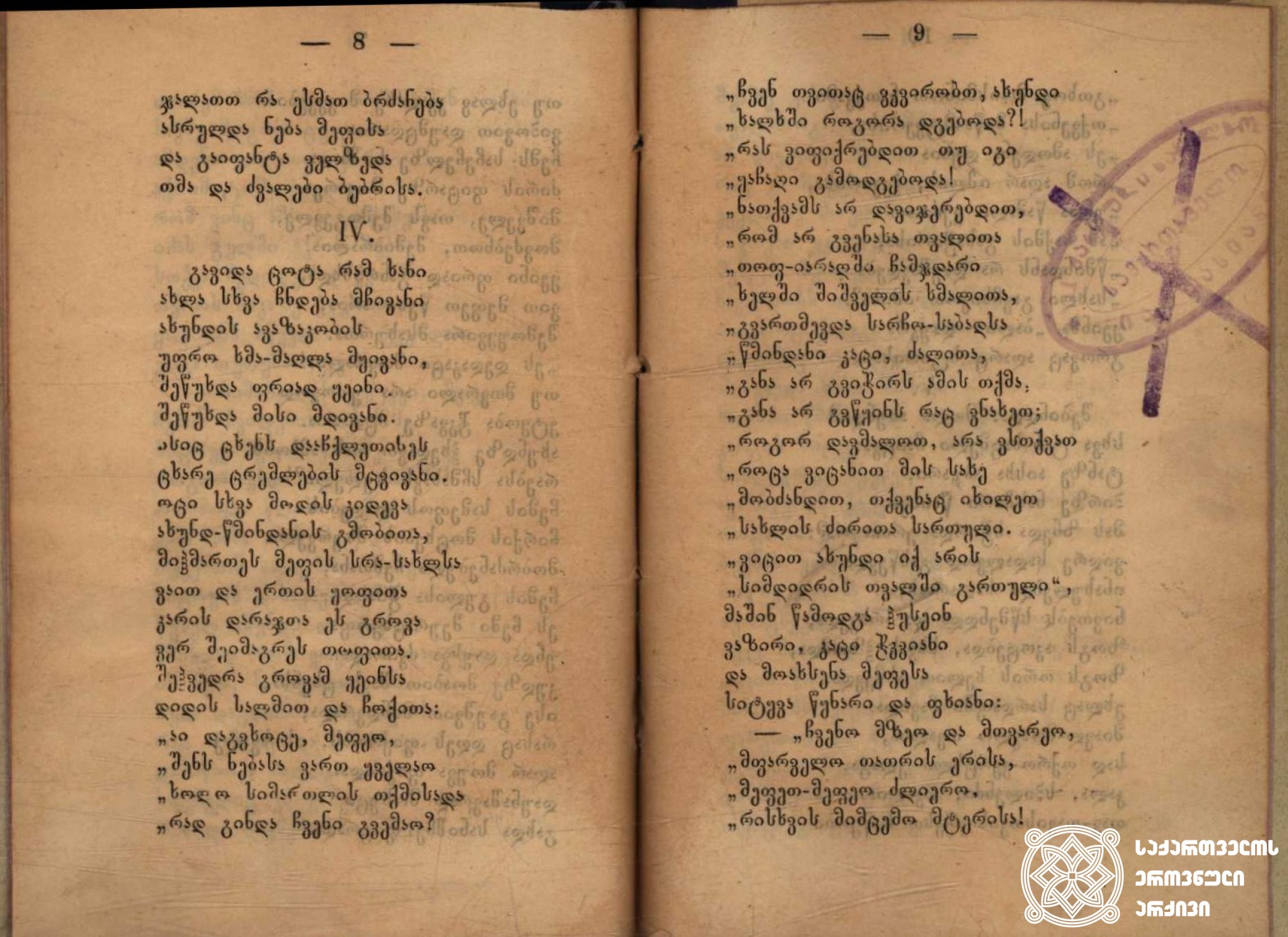 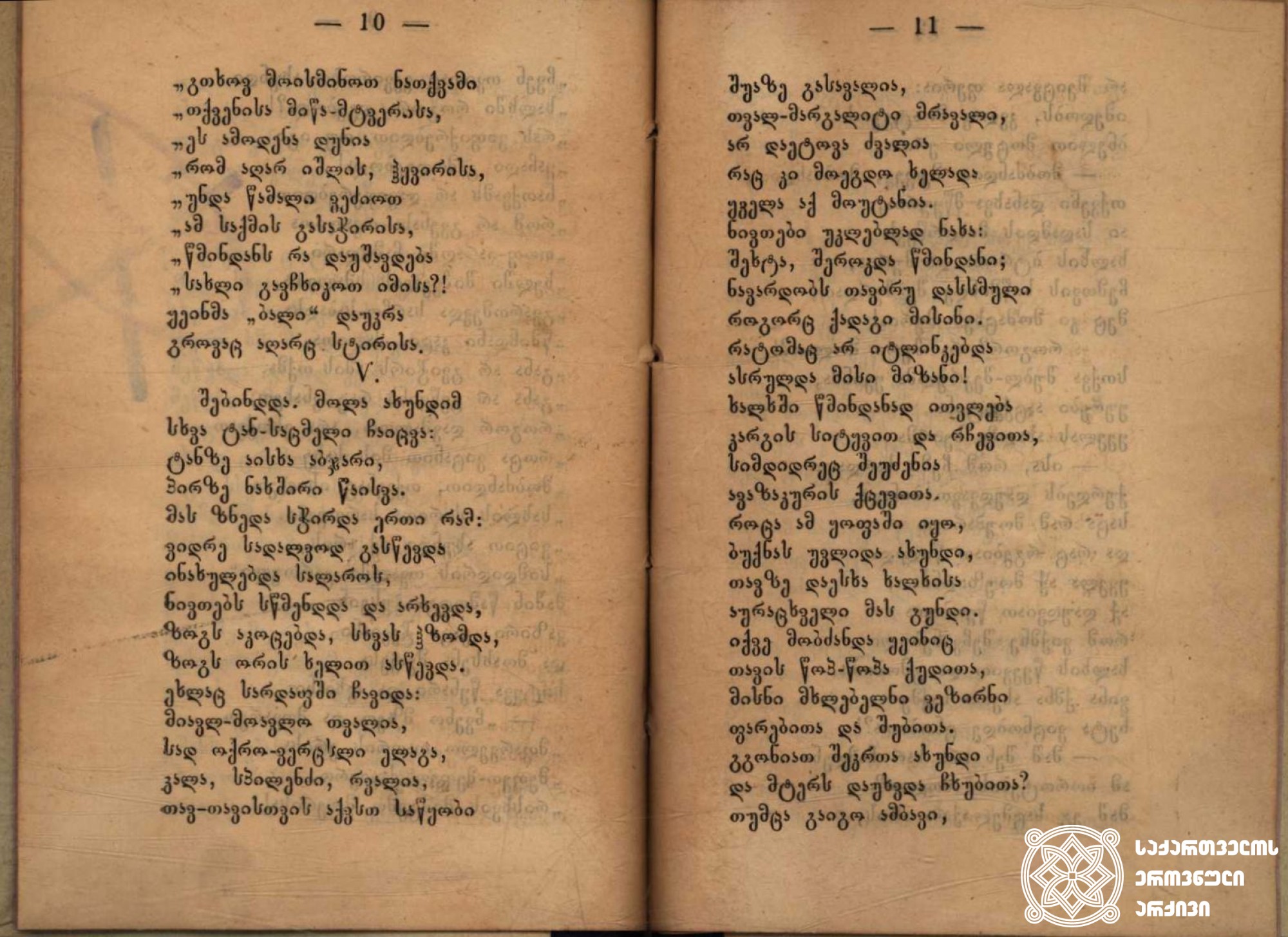 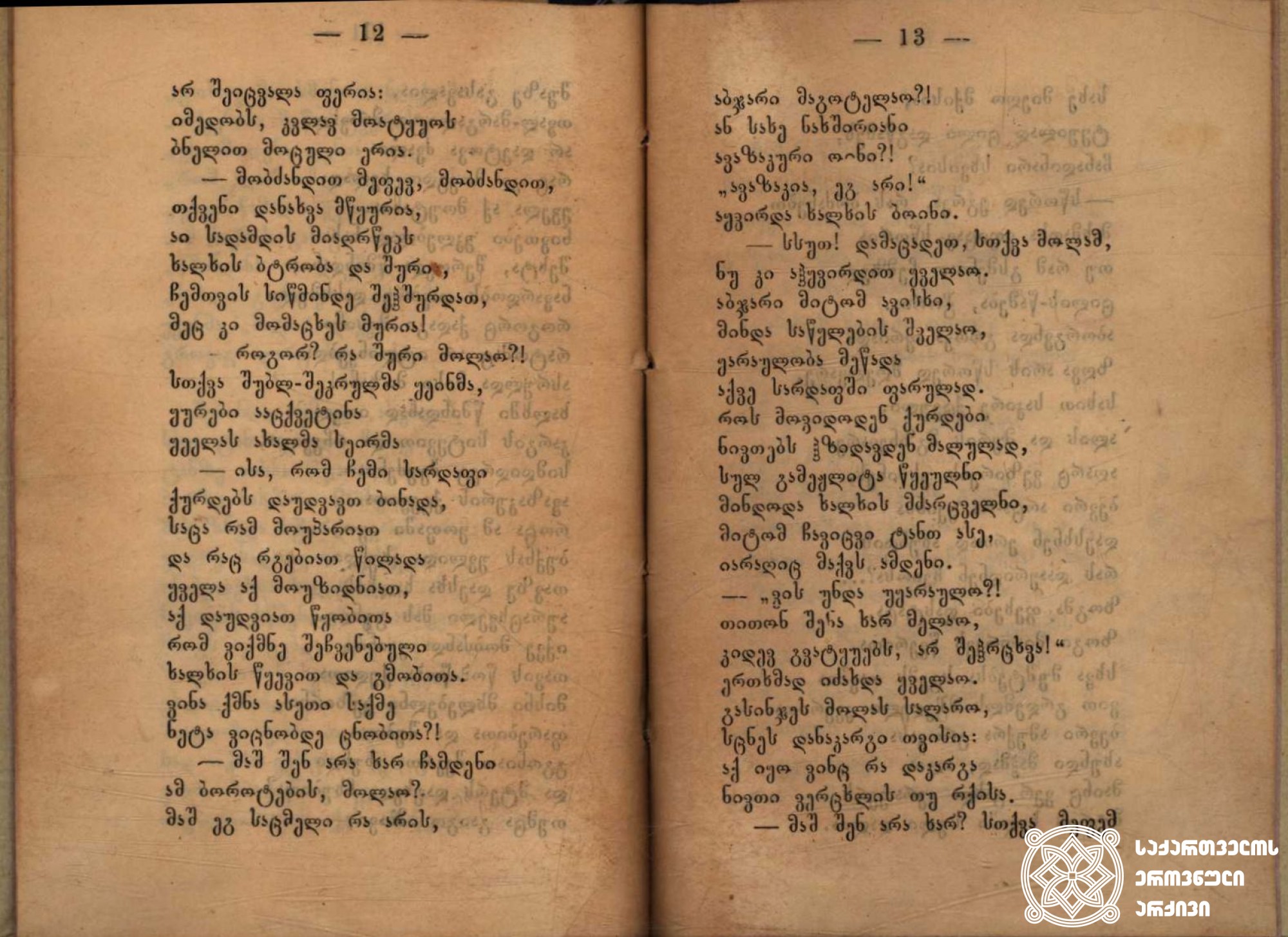 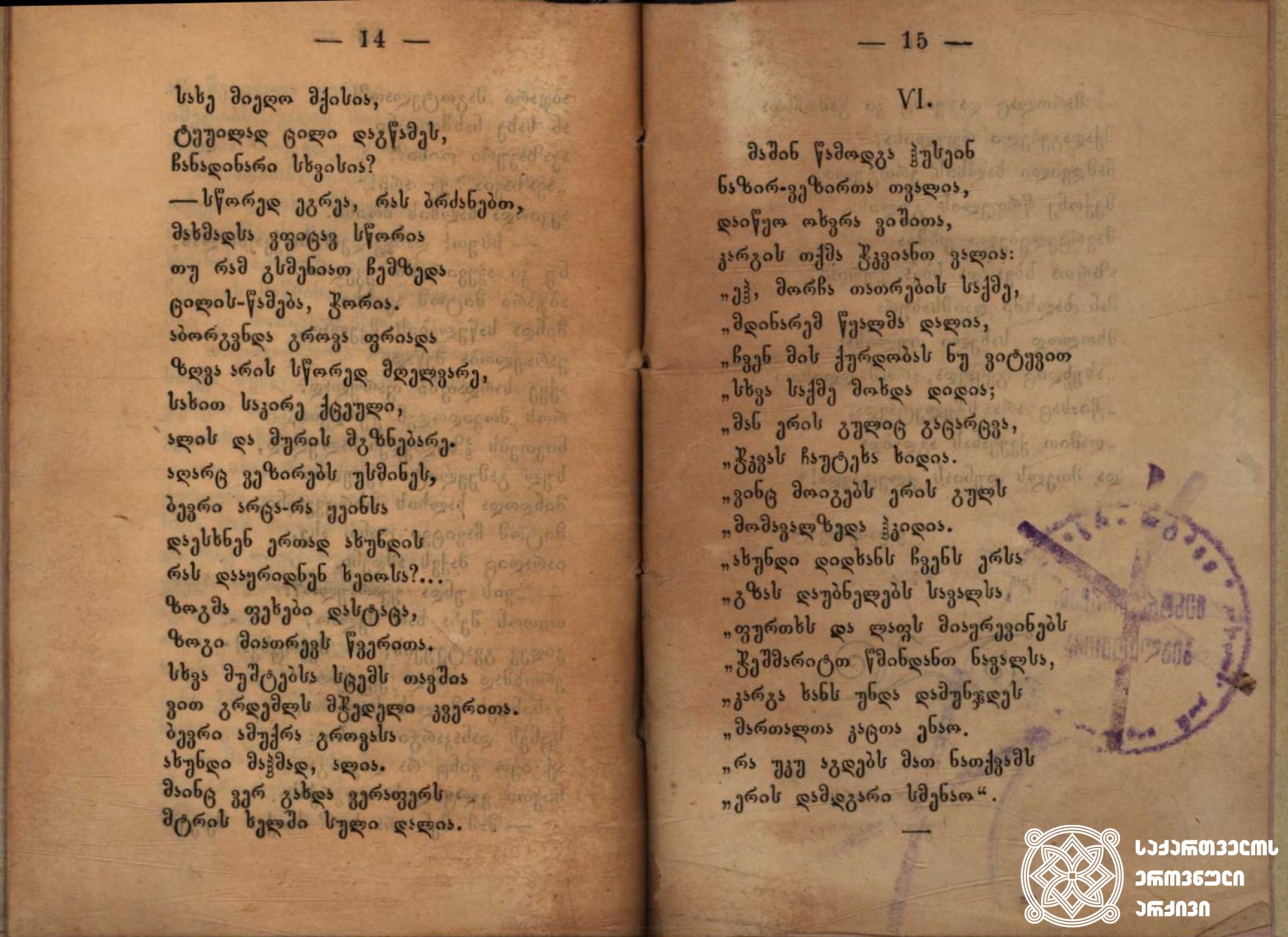 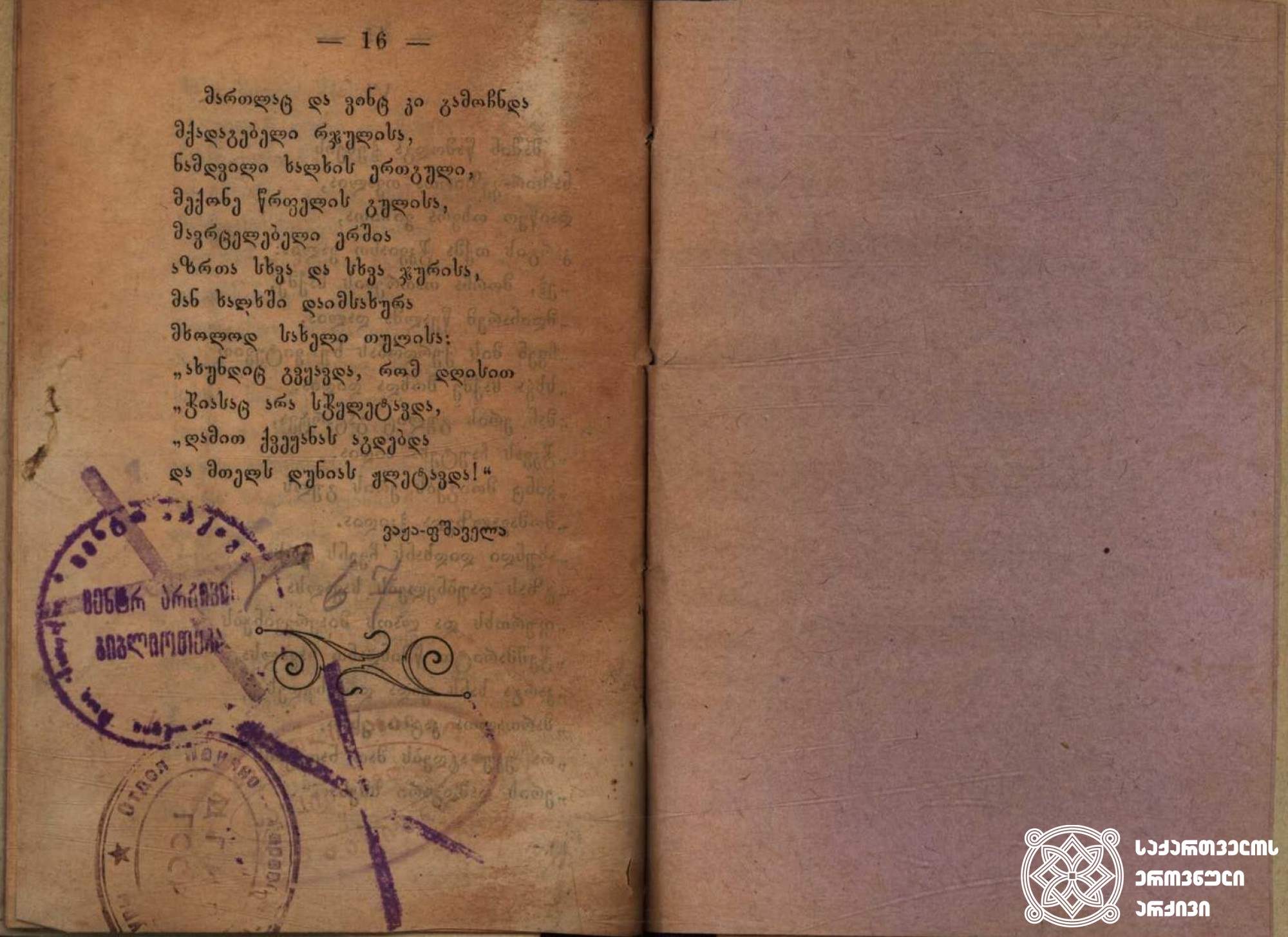 Among the photos of Vazha-Pshavela, his picture with the legendary helmet of Ghachaura stands out. Vazha-Pshavela entrusted this legend to the reader with the story "Aphkhusooba":

"Khevisberi Beridze stood up in front of the hall, a man of medium build, shaped like an oak tree, with a bushy mustache, and a fierce face. Beridze spoke with a thunderous voice; In his hand he held a gold-colored, decorated and scarred helmet, cut in two by Alaga's sword, "seeing", Ludian helmet, which was lit with a holy candle. Beridze called out: Community and village, may God have mercy on Ghachaura! "May God remember," said the people with a hearty conclusion. Ghachaura is a folk hero who is killed by a Khan and his helmet is sacrificed to the icon. Today, with this helmet, big and small ghachauras are drinking. "It's about to be emptied, it's about to be emptied," shouts Dastur. If Pshaveli took off his helmet full of beer, he would turn it over and kiss the helmet, where it seems to be cracked, and he would say: "I changed you to the right one, Vazhav!" !". It follows the story of the life of the old Ghachaura, the murder of Khan and the killing of captives by Apkhushoda...

...Has this been the case before, Apkhusho? It was surrounded by a fortress-wall. There were people of different races; They will not give us rest if we do not drink openly, I told the enemy. Once, the Tatar army came, they destroyed the place, and killed the prisoners; I counted you on the Zhinvan bridge, said my excited uncle, I am happy, sixty men and sixty women. Well, don't watch, tell that cursed ghost, if he is either lame or blind, if he can hold a grudge against someone?! Ghachaura used to be a courtier of the king, and he had a good time capturing the Tatars, when a ball would come out in their apartment, it was a sign that the Tatars would eat bread, and when it went out, they would go to sleep. At the time of the breaking of Apkhusho, Ghachaura was at the mowing, he saw the flame of fire from there, he said that Apkhushue is in trouble, and he was released; When he arrived, Apkhusho met him in shock; One by one, you are chasing people and chasing the enemy. He is fighting against the enemy and the Khan who sits in the tent is shahrvardin inside, with an unguarded sword on his helmet; Elizbari, Ghachaurai's brother, condemns his brother: "You fool, you use the sword like a fool."

You will protect me with your tip, you will not be able to hold the iron anymore and you will kill me. You have taken a lot of gold and silver from me, you will also return the captives; This helmet was donated to the deceased. Shilindi will be held today, "Shesandobrebs" will be staged.

Audiobooks of Vazha-Pshavela's works are also stored in the National Archive of Georgia:

"Chkhikvta Kortsili" was the basis of Arkady Khintibidze's animated film. In 1979, a musical by Alexander Basilaya was staged with the same name.

Zurab Kafianidze and Nato Gagnidze on the set.

Vazha-Pshavela was a school teacher in the village of Didi Toneti in 1886-1887. Many of his autographs are stored in the archive of the Society for Spreading Literacy among Georgians, which reflect that period.

Luka Razikashvili's letters to the Board of the Literacy Society about the needs of the Didi Toneti school. 1887 year

Shortly after his appointment as a teacher, Vazha-Pshavela was confronted by the father of Didi Toneti village and his relatives. They sent a number of complaints to the literacy community. The society checked the teacher's work several times. The archive preserves Luka Razikashvili's answer to Mamasakhlisi's accusations, in which he wrote: "The great Toneti community consists of 1,200 people, let everyone, big and small, be summoned [by the literacy community] and asked." If, except for one, the father of the house and his brother-in-law, the prince, will speak ill of me, then I myself will renounce my craft and say that I am not fit either to be a man or a teacher... God does not please everyone, and how can I please the men who are not men? Are they causing me trouble personally and undermining the school?"

Due to this controversy, Vazha had to leave his position as a school teacher.

He lived in Chargali since 1888, engaged in agricultural activities like other peasants. He rarely went to the bar, only when he had to submit his own works for printing.

Vazha-Pshavela continued to cooperate with the literacy society on the issue of publishing his own works.

In 1893, he approached the community board with an interesting idea - the writer wanted to open a mobile school for people living in the mountains.

Report of Luka Razikashvili (Vazha-Pshavela) to the Board of the Society for Spreading Literacy among Georgians about the opening of a mobile school in Pshavi. Autograph

"The teacher selects eight villages of the district, which are surrounded by smaller villages; In each village, the teacher will have no less than sixty women and sons, and he will distribute one year's time and labor to them. At the end of the year, if the teacher works, he will have more than four hundred students who know "Anbani"..."

In Vazha-Pshavela's work, along with prose and poetic works, journalism occupies a prominent place. "Ra Aris Tavisufleba" was written by the author in 1906, but it reached the readers more than half a century later, in 1961. Excerpt from the article:
"Freedom is expressed in the trust-aspiration of a person; Freedom is an action, an exercise of will, thought, feeling, and not rest, being idle. The freedom of the individual and the nation are closely related to each other. Where the individual is not free, the nation is enslaved, and in an enslaved nation, of course, the individual is also a slave, unfree, a toy in someone else's hands...
Who saw freedom there, because they prevent me from speaking my mother tongue; They don't teach me, they don't tell me, they don't sing to me, they don't praise me? What kind of heart should I have then, what should I feel?"


Luka Razikashvili was monitored by the Tsar's Russian authorities and studied his activities.

This is evidenced by the secret letter of Leontiev, head of the Tianeti Mazri, to the Governor of Tbilisi about his active participation in the revolutionary movement of Vazha-Pshavela.

The author of Pataki addresses the addressee with the initiative of arresting the Georgian writer.

Vazha-Pshavela with relatives and friends at the wedding of her own son, Levan Razikashvili. Gori. May 2, 1912

Vazha-Pshavela's son Levan Razikashvili (1887-1923) was a military officer. She became close to Kakutsa Cholokashvili while studying at the Tbilisi High School. In 1917, he joined the Social-Federalist Party of Georgia. He served as the chief of Pshavi militia.

After the Sovietization of Georgia, he sympathized with the partisans operating in Khevsureti, which is why he was arrested in 1922 and sentenced to be shot on charges of banditry.

The petition of Georgian writers to Sergo Orjonikidze was unsuccessful. In February 1923, Levan was executed, but even that was not enough. The Soviet authorities also removed him from the photographs, although, fortunately, the original photographs have reached us.

Vazha-Pshavela with his wife and children in Chargali. Photo before and after removing Levan.

Vazha-Pshavela with the Sisters of Mercy

Vazha-Pshavela came to Tbilisi for treatment in the spring of 1915. Vazha was treated by doctor and famous critic Ivane Gomarteli. According to his conclusion, the poet was sick with pleurisy. He failed to recover and the writer died on July 27, 1915 in St. Nino's Hospital (today's first building of Tbilisi University).

In the photo: Vazha-Pshavela in the hospital during the last days of his life.

20 years after his death, in 1935, Vazha-Pshavela was moved from Didube to the Pantheon of Public Figures of Mtatsminda