Fragment from the movie "Davit Kldiashvili"

Actor Eros Manjgaladze reads an excerpt from Davit Kldiashvili's memories "On the Road to My Life" 1962 year. Director V. Alavidze.

Davit was taught to read and write by his mother, then he was sent to the Mrelov Preparatory School in Kutaisi. In 1872, at the age of 9, his parents sent him to study at the Kiev military academy.

"I didn't see my parents for three years, after three years I got money in the spring and after the exams I went home for the holidays. I had already forgotten Georgian. I stayed in Kutaisi for two weeks, and since my mother didn't know Russian, I didn't know Georgian, so I took my cousin who was the same age as me as a translator and went to the village with my mother... With tears of joy, I met my mother, who had been very ill from sadness during these three years... This summer, I remembered the language and When I returned to the gymnasium, I took little books with me. After that, every year I returned home for summer vacations and gradually I became better able to speak Georgian and I didn't get bored like some of my comrades..." - wrote Davit Kldiashvili in his memoirs "Chemi Tsckhovrebis Gzaded".

After completing his studies at the Kiev Military Gymnasium, he studied at the Moscow Military Academy in 1880-82. From September 1882, he returned to his homeland and started working in the Batumi military unit, as the head of the gun-weapon repair workshop. 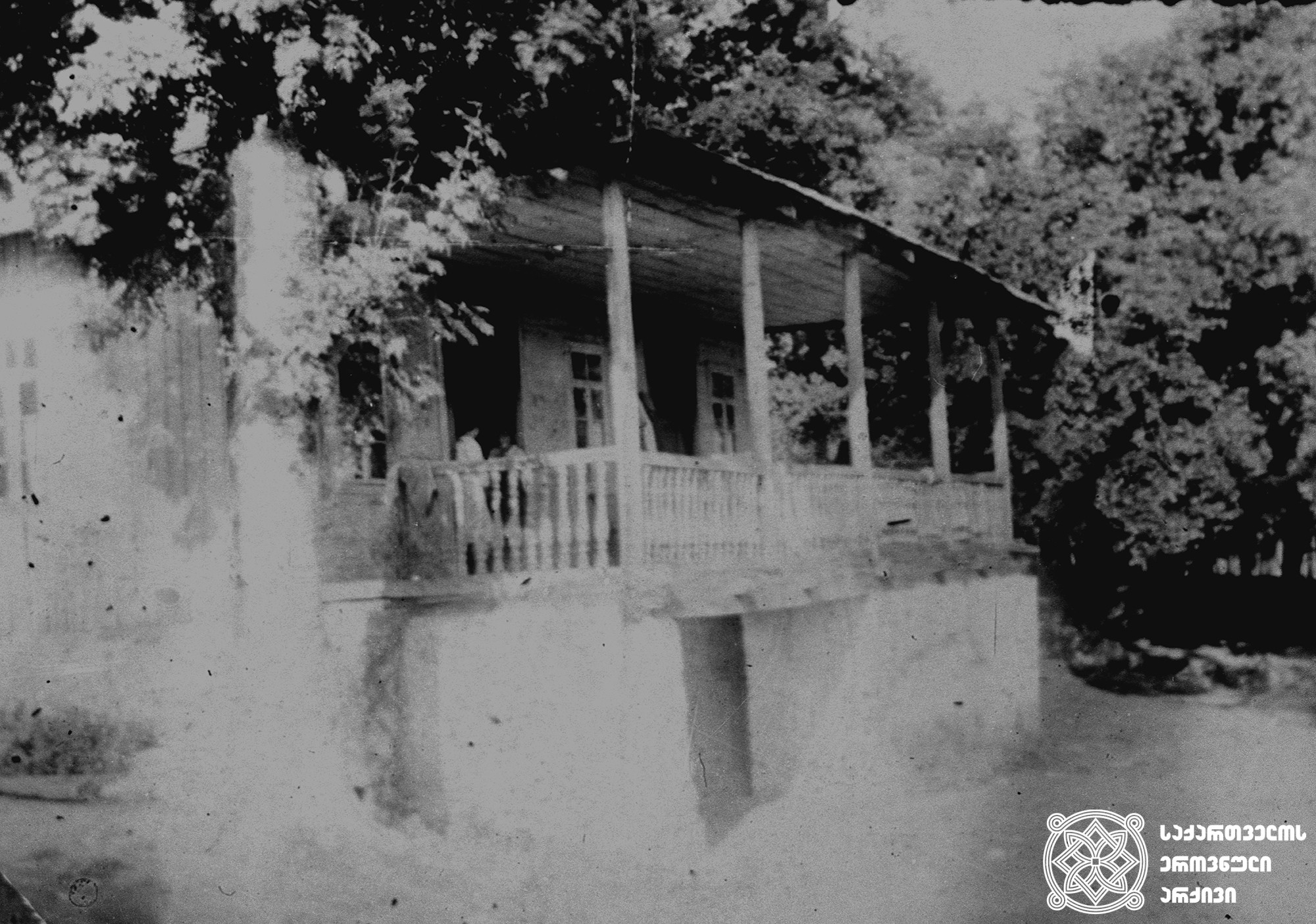 Davit Kldiashvili was actively involved in public and cultural life while living in Batumi. The writer recalls in his memoirs that by 1882 there were 4,000 inhabitants in Batumi. The city had several streets and unpaved streets. By this time, the Society for Spreading Literacy among Georgians had opened a Georgian school for a year, which was greatly supported by the Georgian population of Batumi, especially the family of Police Master Durmishkhan Zhuruli. At the same time, Zhuruli's wife Ketevani was the "gatherer and soul-raiser" of the Batumi Georgian society.

"They took me to the Juruli family and introduced me . Ketevan got me involved in the work after some time. A performance was held for the benefit of the school; Giorgi Eristavi's "Gakra" was being staged, I was assigned the role of Gabriel... Ketevani would sit me in chair and let me play the role. I had to repeat my monologue ten, fifteen times; I was bored with such studies, but no less bored was my teacher, who sometimes called me impatiently: "You can't do that, boy, you have to learn Georgian, you are Georgian!" I was also very eager to learn my language, but I was slow to succeed."

Davit Kldiashvili writes that the sluggish life in a small seaside town was enlivened by the performances of the Kutaisi theater. In the summer, the troupe performed in a small building in the yard of the civic school. There were hundreds of spectators on the stage. Mariam (Mako) Safarova-Abashidze, Keto Andronikashvili, Vaso Abashidze, Alexander (Sandro) Kazbeg made a special impression on Klidiashvili. Once he appeared on the stage with them, playing the role of Gogia deacon in the play "Samshoblo". Alexander Kazbegi played the role of Simon Leonidze in the same play.

"In the third act, when he was passionately addressing the pledgers gathered in the Metekhi prison, I, confused by fear, raised my hand to the Bairagh and went on stage and threw the Bairagh to Sandro. He took me out, I also followed behind, ashamed that I got on the stage at such an untimely time and did such a stupid thing."


In 1882, Davit Kldiashvili met Pavle Machavariani living in the village of Katsakh and became close to his family. In the late 1880s, David married Pavle's daughter Mariam. As he imagined later, it was the story of his father-in-law, Pavle Machavariani, that he used as the basis for "Samanishvili's stepmother".

In the photo: Davit Kldiashvili, his wife Mariam Machavariani-Kldiashvili and children: Simon, Sergo and Nino.

Davit Kldiashvili's works became the basis for many films and plays. In 1929, during the writer's lifetime, director Kote Marjanishvili filmed "Samanishvilis Dedinatsvali" (the 1977 feature film based on the same work belongs to director Eldar Shengelaia).

After the revolution of 1905, Davit Kldiashvili, as an unpopular lieutenant colonel, was forced to resign from military service.

From 1905, he worked first in the Kutaisi city administration, and then in the black stone industry division of Chiaturi.

In 1914, he was called to the Ottoman front by mobilization and was appointed commandant in Lazistan.

In February 1918, he was engaged in military service in Batumi, on the Adjara river. On March 31 of this year, he took the last train from Adjara.

From September 1, 1919, he served in the armed forces of the First Republic of Georgia - in the headquarters of the first division. After the reorganization of the troops, from 1920, they were transferred to the reserve.

On the right of Akaki Tsereteli are sitting: poet Aneta Yurkevich and Varlam Rukhadze, on the left - Davit Kldiashvili. Vasil Amashukeli stands second from the right.

The photo was printed in Pushkin's photo studio.

"When I pick up Davit Kldiashvili's book, I can't help but think: here is Kldiashvili, an inimitably eloquent writer with a peculiar color (don't forget: the first Georgian public writer). You can't help but remember Paolo Iashvili's lines: "And this world turned into the end of an Arab fairy tale." If it were not for Davit Kldiashvili, Solomon Morbeladze would have remained untouched in world literature, no writer would have been able to imagine, portray Bekina, and Darispan along the entire Black Sea coast, who travels with his unwavering purpose. He travels with his lapchini, khurjini and "Ime-Ime". If not for Davit Kldiashvili, Karozhna would have remained untouched, the most beautiful Karozhna."

Davit Kldiashvili and his friends, writers and public figures at the office of magazines and newspapers in "Imereti", 1910s

"Dear Datiko, Titsian is telling me how you turned around for me. Should I say thank you? It will be a little. I once called you "bird's heart". This was the heart of Mindia, the seer of Georgia. I want to hold you in my arms and squeeze you. You will cry. I will cry too. And I don't know which one will please us more. David the writer: No one here writes like you. This is an exaggeration. Ajamet emerald is magic and your word has this magic. In Europe, there is no heart anymore, I live only with my heart. But even at the moment of graying, you will remember my heart and it reminds me for the last time: life was worth it. I wish I could come to see you.

Davit Kldiashvili wrote about the declaration of independence in 1918:

"The freedom of the Georgian nation makes me happy because it is given the opportunity to develop the beautiful spirit that is embedded in it, and I believe that with this, the Georgian nation will join the longed-for brotherhood of the rest of humanity.

Glory to the great soul of the Georgian nation!

Note: A photocopy of the autograph is preserved in the National Archives of Georgia.

In 1920, the government of the First Republic of Georgia celebrated the 30th anniversary of Davit Kldiashvili's writing career.

After the sovietization of Georgia, the writer returned to his native village. There, the elderly Davit Klidiashvili wrote several more stories. In 1924-1926, Kldiashvili's new stories "Shua Ceckhlis Piras" and "Kimote Meshvelidze" were published. In 1925, the memoirs "Chemi Tskhovrebis Gzaze" were published.

In the summer of 1930, Klidiashvili was honored with the 40th anniversary of his writing activity and was awarded the title of People's Writer of the Republic.

Fragments from the documentary film "Davit Kldiashvili" made for the 100th anniversary of the writer's birth.

The writer died in his native village Simoneti on April 24, 1931. He was buried in the pantheon of writers and public figures.

Fragments from the movie plot. April 1931.